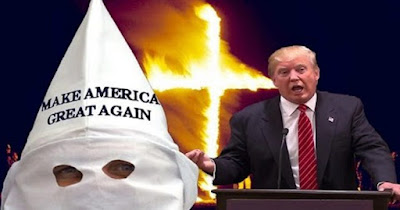 "I'd stop drinking coffee, but I'm not a quitter."

On the dark day that Trump came down an elevator in his lair and announced he was running for president, race baiting became one of his favorite foils to divide the country.

Trump coldly calculated that there were enough racists in the country to become his base if he fed them the right meat. His foundation of fear-mongering encouraged white supremacists to come out from their basements and caves to attack minorities with impunity.

This year has been a break-out year for Trump's racist screeds as he gets bolder (increasingly desperate?) with each incident.

Trump knows the majority of Americans hate him, but has elected to cling to his base in the swing states hoping they'll save him in the electoral college again.

Trump is feeling the heat coming from the House. Judges and lawmakers are getting closer to exposing his corruption weekly.

Hence, we have a do-or-die tactic being employed by a sociopath who just happens to be the leader of the free world.

The following articles are from recent days. They illustrate my point:

Trump Stages Full-Blown Racist Meltdown at "Made in America" Event

Trump attacks Congresswomen at NC rally, As Crowd Chants "Send her Back!"

I could go on, but you see what I'm talking about.

Since Trump slunk into office he's regularly demeaned people of color, especially ones that are judges and lawmakers who don't go along with his sick agenda.

Trump's racist colors are now in full-bloom, and he doesn't care because he believes it's the path to being re-elected.