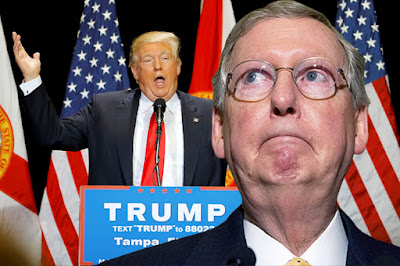 "Coffee. Today isn't happening without it!"

It's about time to call out a traitor to our country (other than Trump); the scoundrel's name is Mitch McConnell, and obstruction is his game. #MoscowMitch

The first senator, and Senate Majority leader, to obstruct Russia's inference with the 2016 election was Mitch McConnell. When Obama's intel community told him what was going on, he told them not to say anything about it.

That was the first sign he was turning traitor.

He favored a cult leader over our election integrity. Mitch felt Trump was as corrupt as himself, and their future could be bright - taking advantage of their power positions in order pursue their personal agendas.

American's were left with the most corrupt and lying president in history.

With the help of Trump's chief conspirator, Moscow Mitch, he has insulated himself from impeachment by controlling the senate vote. Only a traitor would work with the crazed clown in the White House, protecting him from the laws of the land.

One of the biggest warnings in the Mueller report was Russia is still actively attacking us in cyberspace, and we can expect them, and other bad actors, to try to infiltrate our 2020 election process.

As a result, Democrats passed two election security measures that were promptly shot down by the so-called "Grim Reaper" aka, Mitch.

Instead, Moscow Mitch claimed the measures gave Democrats some sort of a partisan advantage. The sad thing is he's right...legislation to secure elections is partisan.

The fact that it's partisan shows just how pathological the Republican Party has become in its determination to hold onto power.

Those measures should have been a bipartisan slam dunk!
Especially the one calling for a paper backup system for states that don't already have one, like Oregon whose mail-in system is secure.

One of the reasons why Moscow Mitch stopped the measures was out of pure greed:

Some things in our system today are partisan in the sense that if we were to do them they would advantage the Democratic Party over the Republican Party.

Now consider what this says about Republicans, who are willing to stop these measures in order to stay in power.

Frankly, Trump and minions like the fact that our election process is still dysfunctional, and getting more help from Russia sounds good.

The last thing Trump wants is an election that is secure, free, fair, and open. Moscow Mitch is doing his best to make sure it won't be.