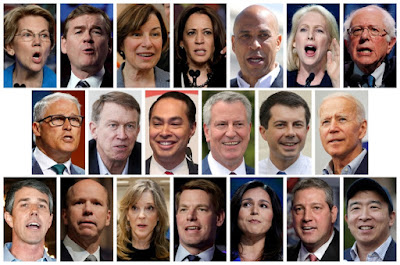 If you're like me, yesterday's round of Democratic debates didn't leave you with the feeling there was a great uniter among the pack.

I strongly suspect tonight's round two of debates will be much of the same... pablum for liberals, but no earth-shaker to carry the Democratic banner forward in 2020.

One of the reasons I feel this way is the debate format only allows very limited response times. That makes it hard for a candidate to "strike the right cord." I was amazed at how they held the hands up to speak next - it had a Romper Room feel to it.

The result, was "gotcha time," as ten candidates desperately tried to separate themselves from their competitors. The bottom line is I had a hard time getting inspired by any of them.

Like I said, I'm going to partly attribute that to a lack of time and the need to hear more.

What I'm looking for is a "re-uniter." It may end up being a Don Quixote quest, but I'm going to hang in there and hope for the best. There's a lot of time left.

I was watching the news yesterday and saw this elderly man from Michigan tell a reporter, "I'd vote for Bozo the Clown if I thought he could beat Trump in the next election."

Let's hope when it comes to voting time next November, Democrats, Independents, and Republicans with a conscience, feel the same way.

It would be a big boost, however, if the party's pick was a "re-uniter." This win has to be a slam dunk.