Americans: Reflections of Who We Really Are 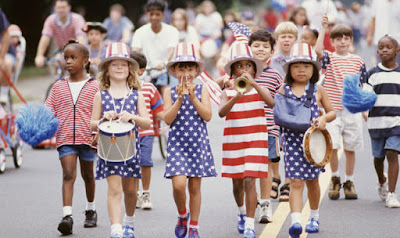 "Coffee makes me do the happy dance!" Anonymous

I'm kicking back a little longer this morning and adding an extra cup of coffee to my normal routine to fully enjoy this morning.

2) Democrats Swore Trump Would Give a Partisan Speech. He Gave a Unifying One

These two articles reflect who we, as Americans, are...divided and suspicious of one another.

But, as I further reflected upon the event it occurred to me that there are still many unifying themes that Americans still agree on.

First, and foremost, the pursuit of liberty and justice for all. That great concept in our society is still firmly embraced, regardless of what Trump does and says.

This Fourth of July was still a celebration of our Independence, despite pundits opposing views.

Families gathered nationwide, BBQ was the order of the day, and little local parades and firework displays flourished just like in years past.

As for politics, they will continue to be a nasty affair that divides Americans - something that happened immediately after our two-party system was adopted back in the day.

That's okay. That's who were are. A vibrant, independent thinking collection of characters from all over the world.

As the majority of Americans struggle with the Trump regime and the damage it's doing (and done), a new administration will have to right many wrongs.

Just like the Tea Pot Dome Scandal in 1920 shocked Americans by revealing an unprecedented level of greed and corruption within the federal government, wrongs will be corrected after Trump is duly kicked out of the White House in 2020.

Americans are - and have been - a melting pot of nationalities from all over the world, and nothing will ever change that.