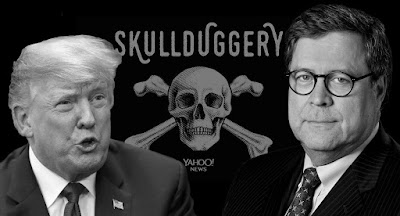 "Coffee the favorite drink of the civilized world."-Thomas Jefferson

After shamelessly pursuing the job of Attorney General, and lying to the lawmakers who were vetting him, William Barr became Trump's chief enabler.

His slavish loyalty thus far has turned the office of the Attorney General into a petting zoo for Trump.

Watching him lie about the contents of the Mueller report, and colluding with Trump to blur it's results, was just one example of how far Barr will go to please his master.

After Trump had to concede that his damning question for the census failed, Barr twisted the defeat into a fake victory by putting together a plan to use the resources already available to the government to pursue his ultimate goal of disenfranchising millions of Hispanics.

Watching Barr congratulate Trump in the Rose Garden for his Executive Order to keep pursuing his nefarious goal, was flat-out embarrassing.

Barr congratulated him twice in a short sappy speech meant to ease Donny's legislative loss. It was like watching a parent soothe a rambunctious child who just got kicked out of school.

In relatively short order Barr has destroyed the credibility of his office and the Department of Justice who are both seen as subservient to Trump.

As chief enabler, Barr is propping up Trump's crooked regime by challenging anyone seeking to restore credibility and honesty to the office.

The sad thing about the demise of credibility in the top law enforcement position is we all could see it coming when he was being vetted.

But thanks to Trump's GOP enablers in the Senate he was confirmed anyway.

We're seeing the results of their handiwork every day now, as Barr goes out of way to please Trump and challenge the rules of law in order to benefit the most corrupt regime Washington DC has ever seen.