I Didn't Vote For McCain, But I Admire Him and His Spirit 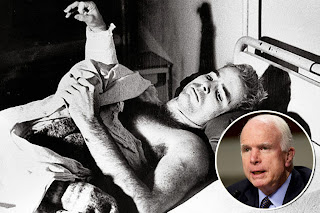 I still think there's a small possibility I might have voted for John McCain when he ran for president, if he wouldn't have brought Sarah Palin aboard.

Yes, I had other concerns, but it was adding Palin as VP that cemented my decision not to vote for him.

As a Vietnam veteran, I have nothing but admiration for how McCain handled himself as a prisoner-of-war. I'll always be in awe of what he went through, and how he managed to lead a fairly normal life afterwards.

When our current Asshole-In-Chief derided McCain during one of his hate rallies, saying he didn't like people who got captured, my blood boiled!

The idea that cadet Bonespur, who dodged the draft four times, would criticize a combat veteran, and hero, was outrageous.

Despite leaning liberal on a lot of subjects, I also listen to what conservatives have to say, if they appear sincere in their desire to serve the public.

McCain is one of only a handful of conservatives who have stood up to Trump. His vote stopped Trump and his cronies in their tracks when they tried to get rid of The Affordable Care Act.

He challenges Trump when he lies (which is often).

If McCain didn't have a fatal cancer, I'm sure he would have run another term to try to protect the Constitution from being destroyed by Trump.

The man is a fighter, and has the spirit of a warrior-statesman. As much as I've disagreed with some of the things McCain's done, I've always respected the man.

How could I not?

Just because his political views generally run opposite of mine, is no reason to revile a man whose spent his life serving this country.

When the time comes, and McCain loses this final battle to survive one more time, I'll proudly salute his life, and hope he rests in peace for eternity.

Related: At His Ranch, John McCain Shares Memories and Regrets With Friends