Russia and the NRA: The 'Other' Russian Investigation 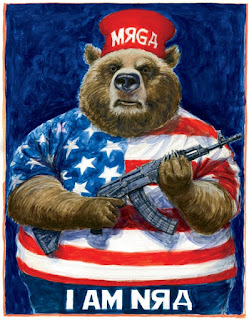 Everyone in the world (with the exception of some blind monks in the Himalayas) knows about the Trump campaign and Russian collusion investigation.

Not so well known, is the FBI is investigating the NRA about obtaining funds from Russia in order to promote Trump in 2016.

At first, the NRA stated categorically that it did not accept money from Russian donors for election-related purposes when the FBI came calling.

That claim changed in the early days of the investigation, and the NRA admitted it had a single Russian donor - Alexander Torshin.

For starters, it turns out that Torshin, a Russian banker and NRA member with ties to the Kremlin, and the Russian mob, was put on a sanctions list by the US Treasury Department.

That wasn't the end of it, however.

Next, the NRA admitted that 20 Russian citizens had collectively donated $2,500, mostly in "membership dues and additional magazine subscriptions."

The NRA told the FBI the money was only collected for lawful purposes.

Because the NRA's political arm has insulated the group with secrecy and bribery, some think it's power is total.

We'll see what the FBI has to say about that when they release their findings.

One question looms however, will the FBI be allowed to share the results? Will Trump puppets, like Sessions, stuff the report into his "round file," for partisan purposes?

Or, will Trump (the NRA's new champion) hide the final report before the truth can come out to the public?