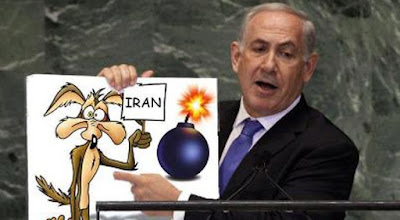 France's president Macron tried to charm Trump into staying with the current Iran agreement. He might as well been talking to a stone wall.

Perhaps he didn't realize how invested Trump was in tearing up the treaty. Trump, Kushner and Netanyahu go back a long way.

Last Monday, Netanyahu, accused Iran of continuing to hide and expand its nuclear weapons know-how after the 2015 deal, presenting what he claimed was “new and conclusive proof” of violations.

The world called BS on that attempt and Netanyahu's staged presentation fell flat.

That didn't deter Trump however. He had another plan to create chaos in the middle east. Reverting back to his campaign days, Trump hired private investigators to "get dirt" on two of Obama's top national security advisers to discredit the deal.

This was one of the dirty tactics Trump and company pulled during the presidential election in 2016. The Trump camp made numerous attempts to dig up dirt on Hillary, going so far as to work with the Russians to get what they wanted.

As we all know, special counsel Robert Mueller is leading an investigation into apparent attempts by Trump's inner-circle to dig up damaging information on Hillary Clinton.

This extraordinary revelation by The Guardian, come days before Trump’s May 12 deadline to either scrap or continue to abide by the international deal limiting Iran's nuclear program.

A spokesman for the White House's national security counsel offered "no comment" when approached by the press.

Why Trump is so eager to help Netanyahu - who has his own problems dealing with corruption charges - is not immediately clear.

It does appear that they are kindred souls; thick as thieves, as the saying goes.

Here's something else to consider when looking for reasons why Trump would want to back out of a deal America signed with the international community:

Trump's under intense pressure from multiple lawsuits and the Russia investigation. At some point, when it looks like he's going to go down for his misdeeds, he could declare war on Iran for trumped-up reasons.

You might want to check out the movie "Wag The Dog" for some context.