One-Third of Americans Have No Problem With Liars 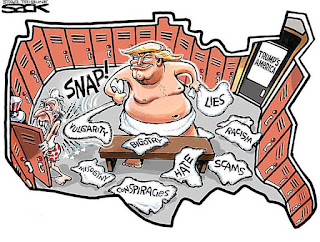 You want the good news, or the bad news, first?

In the 2016 exit polls only 33 percent of voters viewed Trump as honest and trustworthy, and he still won.

That tells me there were a lot of Americans who voted for Trump despite knowing he was a first-class liar.

That percentage of Americans coupled, with his deluded cult base of reality TV fans, helped Trump win the election with the additional help of Russia.

What do those voters - who weren't part of the 33 percent of his regular cult followers - but still voted for a known serial liar, think now?

I suspect there's a lot of buyers remorse going on, and we'll see that at the midterms when the Democrats take back the House, and possibly even the Senate.

It also helps to remember that two-thirds of Americans agree that Trump is a serial liar. Several news organizations document his daily lies. Yes, daily. He averages six a day.

With over 3000 documented lies, Trump has taken the office of the president down into the gutter, where truth doesn't matter.

That he's got away with inventing his own realities as we watch him, is nothing short of scary. Trump is truly at that the point where he believes he's above the law.

He's taken on the FBI, the CIA, the EPA, our entire judiciary system, and the world, in a one-man assault upon democracy and the rule of law.

Millions of Americans no longer trust the news, or organizations that fact-check, calling them fake news. This is one of the most insidious things Trump has accomplished thus far.

It looks like Trump is in hot water after his personal lawyer Michael Cohen had his home and office raided by the FBI. Being Trump's "fixer" he knows where all Donny's skeletons are hidden.

Trump has already kicked him under the bus.

The chance that Cohen,  who has been charged with multiple felonies, will keep his mouth shut and do 30-years of prison for his buddy is a stretch...and Trump knows it.

Trump's public lies, and rotating stories, are not going to help Cohen's case when he goes to trial. Will he flip on his mentor?

Will truth finally win out? Can we reverse the damage Trump and his cronies have created?

I think the answers are, yes, and yes.