What A Crazy Week! It's TGIF - Are You Ready To Party? 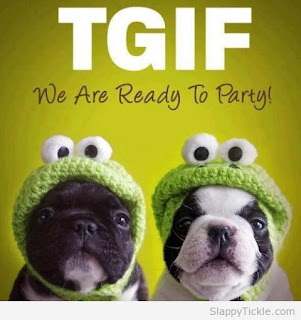 Can you say TGIF?

Has this last week's news events left you exhausted?

Has there been enough drama for you? Kick back and enjoy this weekend.

It's been a crazy week.

1. Omarosa Manigault Newman suddenly left her White House job under a cloud yesterday.
She told the press that she observed things in the White House that made her uncomfortable(?) and that upset her. Stay tuned.

2. Trump backs pedophile in Alabama special election...and Moore the molester loses, and isn't going to the senate. His democratic opponent Doug Jones, is however.

3. Senate Judiciary Committee: Deputy Attorney General Rod Rosenstein offered a strong defense of Robert Mueller's appointment and actions as special counsel Wednesday and further praised the FBI, even as the bureau has been criticized by President Donald Trump in recent weeks.
Republicans called for a second special counsel to investigate Mueller's team.

4. Kentucky state Rep. Dan Johnson took his own life on Wednesday afternoon after being publicly accused of molesting a teen girl, according to ABC affiliate WHAS in Louisville.

5. Three women who were sexually harassed by Trump went on the Today Show and told their stories. Afterwards, they went to the press and called for a Congressional Ethics Investigation.
Trump called them liars. Then he attacked Sen. Gillibrand who also called for an investigation, or for him to resign.

6. Republicans are pushing ahead with a tax reform bill that still isn't complete, or has been rated by bi-partisan finance committee. They hope to hand it to Trump as a Christmas present for him, and the wealthy in this country.

7. Net Neutrality - Millions of comments submitted to the Federal Communications Commission as it sought public feedback on the agency's plan to roll back "net neutrality" rules were fake, New York prosecutors claim.

The state's attorney general, Eric Schneiderman, said Wednesday his office's investigation found that 2 million of the comments stole the identities of real Americans.

These random samples of news this week are only highlights of what's going down in our world today.
That's become the norm in the Trump era.