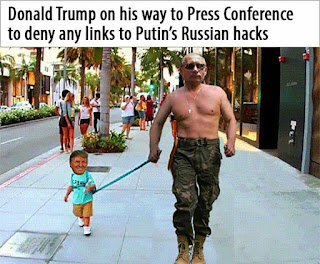 It was like watching a bunch of seals barking to get attention.

The grilling of Rod Rosenstein by Trump minions in the House Judiciary Committee showed how far they're willing to go to divert attention away from their master's love affair with Russia.

The height of absurdity came when the Trumpies called for a second investigation to go after Mueller and his team.

I couldn't believe their gall...and outright devotion to a man who treats women like objects to play with, and who can't go a day without lying at least five times! (See NY Times article)

Everyone of those inquiring Republicans, aka Trump Toads, have turned their back on the real Republican Party to dance with the devil.

They repeatedly badgered Rosenstein with the same false accusations and conspiracy theories. I have to hand it to Rosenstein, he stood up pretty damn well.

The Trumpies leveled thinly veiled threats against Rosenstein, even indicating they would forge ahead and appoint their own special counsel if they don't like the IG's report on the member of Mueller's team whose been accused of showing unfair bias.

In summary, it was a group of desperate Donny minions doing their best to turn attention away from the Russian/Trump connection investigation.