Trump vs Women: A Lifelong Assault Against Females 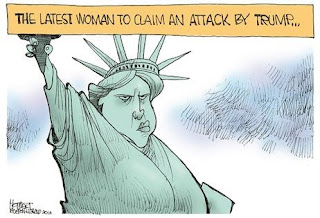 His own mother pondered what she did wrong in bearing such a misogynistic son.

After cheating on her with actress Marla Maples, Trump divorced her and married Maples. They had one child.

Then he cheated on her - like the previous marriage his cheating was widely covered by the media - with Melania Knauss.

After divorcing Maples, Trump married Melania and they had a child.

But Trump's interest in harassing women in the workplace and in public never ceased. The following link is a quick example:

Last year, audio emerged from the long-running Howard Stern radio show, where Trump can be heard over the years discussing his daughter Ivanka’s “voluptuous” curves, his promiscuous sex life, and his lewd behavior during his ownership of the Miss Universe pageant.

The recordings, first uncovered by CNN, span 17 years of appearances by Trump on Stern’s show, where the two frequently engaged in sexually explicit conversation.

Last week, three of the women Trump sexually harassed appeared on The Today Show and followed that up with a press conference calling for Congress to investigate their claims.

Two days ago, another woman stepped forward, Melinda McGillivray, and said Trump groped her in 2003. She also demanded an investigation by an Ethics Committee.

You'd think at this point in time, the #MeToo women's movement would generate enough interest to finally hold Trump accountable.

Despite his claim that because the American people elected him they gave him a free pass on his past treatment of women...he's dead wrong.

His rise to power came from tribalism (I've said this before) not because people thought he was honest, and always treated women with respect.

That was apparent after last year's election during the exit polls. They showed that over 70 percent of Americans didn't think he was trustworthy ,or had the right temperament to lead the country.

But those die-hard conservative voters didn't allow anything to deter them from supporting Trump. They hated Hillary Clinton that much, and Trump promised many things that appealed to the fringe elements in our country.

These same die-hard supporters will continue to believe anything Trump tells them - regardless of reality, or the truth.

So, it's up to the rest of the country to lean on our spineless representatives in Congress to hold Trump to account for his lifelong assault against females.