'Tis The Season Where The GOP Loses All Morality 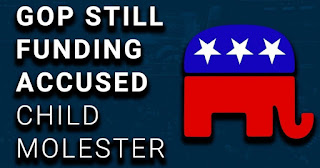 Before this day is over, Republicans will lose a seat in the senate, or will bring a child-molester to Congress (which has threatened to have an ethics committee look into the allegations against him the moment he's seated).

Either way, Republicans are going to pay the piper.

The bad news for the GOP is it doesn't end there. 'Tis the season to go after men who've sexual assaulted women, and got away with it until now.

And we all know what that means! Time to trot out Donny Little Hands accusers who are still looking for justice. I watched three of his accusers tell their stories on the Today Show.

When these brave women went from the Today Show to the media demanding a Congressional ethics investigation, I was delighted to see the subject resurface.

That's because the American people didn't give Trump a pass (as the White House claims) on the sexual harassment charges.

What happened was an acute case of tribalism where Republicans held their noses and voted for Chump...in spite of his history of disrespecting women.

Now it's time for Donny to pay the piper. These women aren't just going to sit back and continue to be humiliated by our Liar-In-Chief.

I'm waiting to see what if the Summer Dervos defamation lawsuit is going to go forward. When Chump called her (and the other women) a liar she pushed back, and is now waiting for her day in court.

May it come soon.

If the judge allows her case to go forward (possibly opening the way for others to get aboard) Chump's credibility will take another blow.

By backing a child molester, Lump has shown where his sympathies lie...and it's not with the victims. He sees a kindred spirit  in Moore the molester.

The bottom line is regardless of what happens in today's special election in Alabama, Republicans are in a no-win situation.