John Wayne: Why I Forgave an American Icon’s Politics

A blast from the past..

Vietnam 1970 - I had been in country one week when my squad leader said, “We don’t need any John Wayne’s in this squad.” Nearly everyone I met during my tour in Vietnam and Cambodia agreed with that sentiment.

At first, it was hard for me to understand why everyone seemed so down on the Duke. At nineteen I knew very little about politics.

After watching him use his iconic status to support conservative causes that kept the war going I found myself at odds with my boyhood hero. There was no getting around it; the Duke supported the Vietnam War by producing, co-directing, and starring in the critically panned movie The Green Berets in 1968.

That movie was propaganda, pure and simple. After awhile, I understood why his name come to represent the establishment, and the senseless war we were fighting. I discovered there were no hero’s like the ones in the movies.

Just survivors. Most of the Vietnamese I met wanted us to go home. We came to realize we were invaders, not saviors. Then it became a game to stay alive, at whatever cost.

I never saw anyone cry out, “For God and Country” and charge into an enemy bunker with an M-16 blazing away. That’s not the war I saw. I saw corruption on the South Vietnamese side and the American side. A thriving black market. Master sergeants in supply getting rich. And lots of Americans doing drugs.

How could my boyhood hero have supported such a massive mistake? Why did he agree with the government that pu

t us there for no good reason?  What made Marion Mitchell Morrison side with the bad guys? His hat was green, but it might as well been black.

While he epitomized rugged masculinity and became an enduring American icon, he was also known for his conservative political views and for being a hawk on the war. Looking back, I believe the Duke felt he was patriotic and doing the right thing at the time.

Time has been kind to his memory. A Harris Poll this year placed him 7th among America's favorite top 10 film stars. He was the only deceased star on the list, and the only one who appeared in the poll every year since it first began in 1994.

To millions, he symbolized and communicated American values and ideals. Nothing will ever change that. I’ll always consider him a great actor despite disagreeing with his politics during those turbulent years of our involvement in Vietnam.

His son, Ethan Wayne, sold some of his stuff a couple of years ago. Ethan had such a large collection of his father's movie memorabilia that he decided to open his archives for the auction which brought record-setting prices.

Among the items sold was his Golden Globe award for True Grit. In an article two years ago. Ethan Wayne said his dad still resonated with fans around the world, not only because of his movies, "…but because he was also liked personally. People knew he was the same kind of guy off screen as he was on screen. You could sense that about him. He never got bogged down with the darker side of his life."

Some hold Wayne in contempt for the paradox between his early actions - he never went into the military - and his rampant patriotism in later decades. His widow suggested he was that way because he felt guilty and not because he was a hypocrite.

You know what? I forgave him a long time ago. I’m beyond those bad old days when the Duke wore a Black hat instead of his customary White one. I have no problem watching a re-run of  him in Stage Coach, The Searchers, The High and Mighty, The Flying Tigers, or True Grit.

Wayne played the lead in 142 of his film appearances. I’m pretty sure I’ve seen every film he ever made. 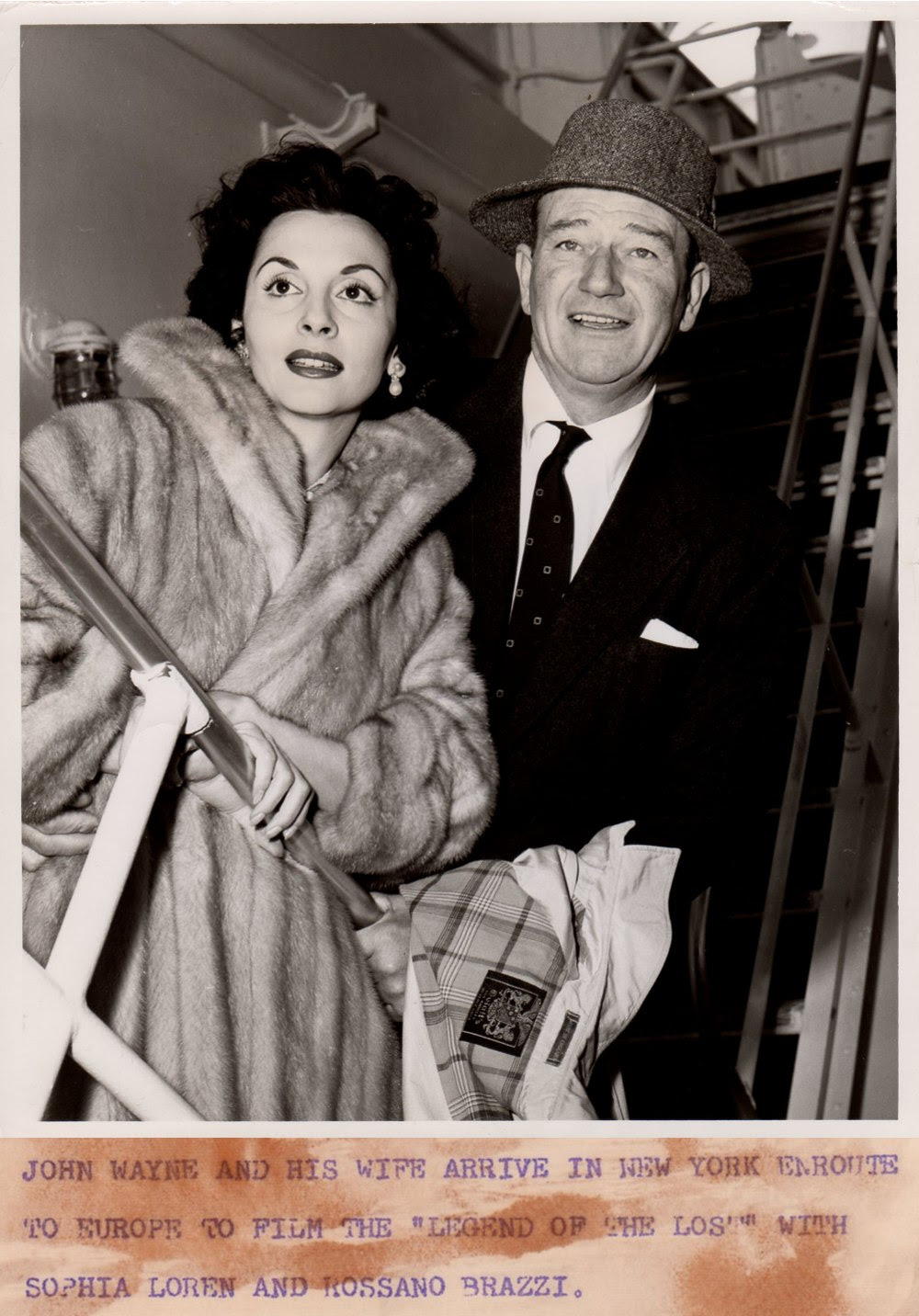 me to go back to my childhood days when the Duke ruled the cinema. I once worked as a security guard at a gated community where he and his wife Pilar lived in Newport Beach (1974). I saw him there regularly and he always took a moment to talk.

Those memories serve me well. He was easy to talk with. We had many interesting conversations, him in his non-descript Ford Station Wagon (white, and a horrible olive green), and me standing there in a rent-a-cop uniform at the main gate. He treated me with respect when he learned I was a Vietnam veteran.

One day, when I told him I was getting married, he gave me a cigar and wished me the best of luck.

Little did I know that his marriage was on the rocks at the time! I noticed that they never seemed to be in a vehicle together, but wrote that off as what rich folks did. Ride in separate cars.

I was only 23-years old, and had a lot to learn about relationships. I’m still learning after 40 years of marriage!

You know, I can’t help wondering what that cigar would have sold for at that big auction?