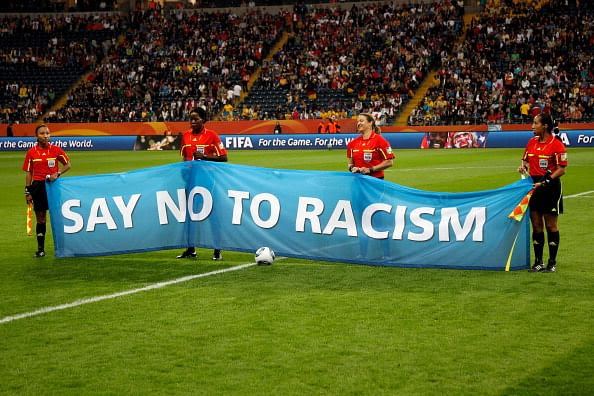 Sometimes I’m not sure if I’m just naïve, or out-of-the-loop, when it comes to racism in sports today.

I thought everyone agreed Jackie Robinson was a great player (and man), but there’s people who still don’t like the fact that he broke down the race barrier in professional baseball.

I guess I need to read more on the subject because this article makes it clear that racism is still alive and well in professional sports. All of them.

Then I read about the LA Clippers’ owner, Donald Sterling. Wow! According to Time Online he’s had a long history of alleged racism — he paid the largest fine the U.S. government has ever handed out for housing discrimination, among other things.

Here we are in the middle of the Clippers’ playoff run and his mouth has once again spewed foul words about African-Americans.

TMZ has audio allegedly of Sterling arguing with his girlfriend because she put on her Instagram account a picture of her with Magic Johnson when she met him (she soon after took it down). The audio is hard to listen to it is so disgusting, but here are a few “highlights:

“It bothers me a lot that you want to broadcast that you’re associating with black people. Do you have to?”

“You can sleep with [black people]. You can bring them in, you can do whatever you want. The little I ask you is not to promote it on that … and not to bring them to my games.”

“I’m just saying, in your lousy f******* Instagrams, you don’t have to have yourself with, walking with black people.”

“…Don’t put him [Magic] on an Instagram for the world to have to see so they have to call me. And don’t bring him to my games.”