Friday Fun: A Humorous Look at the History of Food 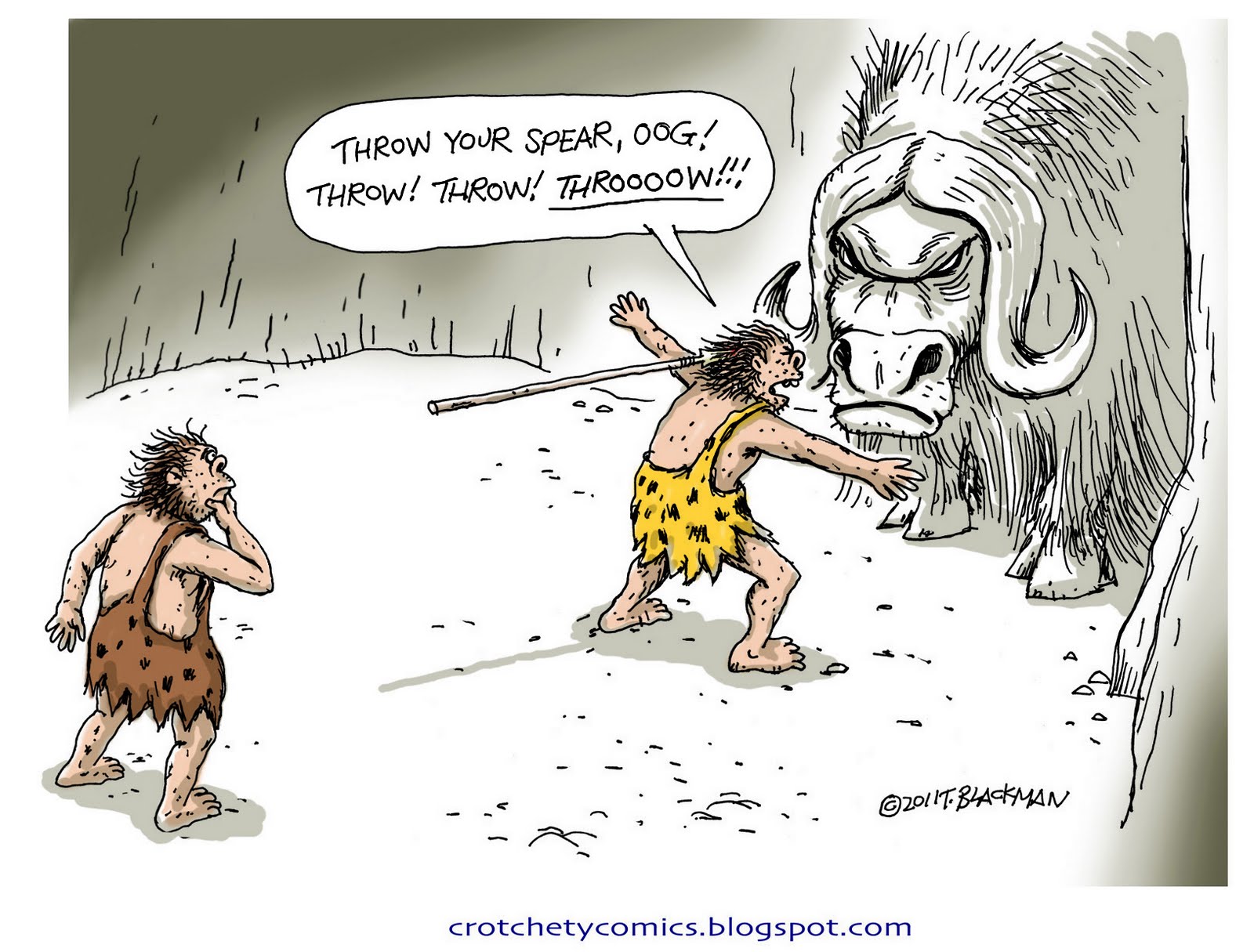 Good Day World!
Camera pans in; 338,000 years ago somewhere in Ethiopia two early humans are discussing the merits of meat:
Oog -  “I’m sick and tired of eating grubs and berries!”
Nug - “Me too. You know what we got to do?”
Oog -  “Yep. Risk our lives hunting down meat that is many times bigger than Nug and Oog. It’s dangerous business, but a good dinosaur steak is hard to beat when you want something good to eat.”
Nug - “Not according to Oop. He says he won’t eat anything with a face and is fine grubbing around for berries and insects.”
Oog - “That’s because Oop is too lazy to hunt down a meat meal. Besides, he’s never been right since getting smacked by that big lizard’s tail.”
Nug - “Okay then. I’ll go get my spear and tell the little lady we may be gone for a few days.”
Oog - “Sounds good. My mouth is watering just thinking about the feast we’re going to have!”
Two months later Nug’s wife and Oog’s girlfriend are now with new hunter-gathers that don’t like meat! 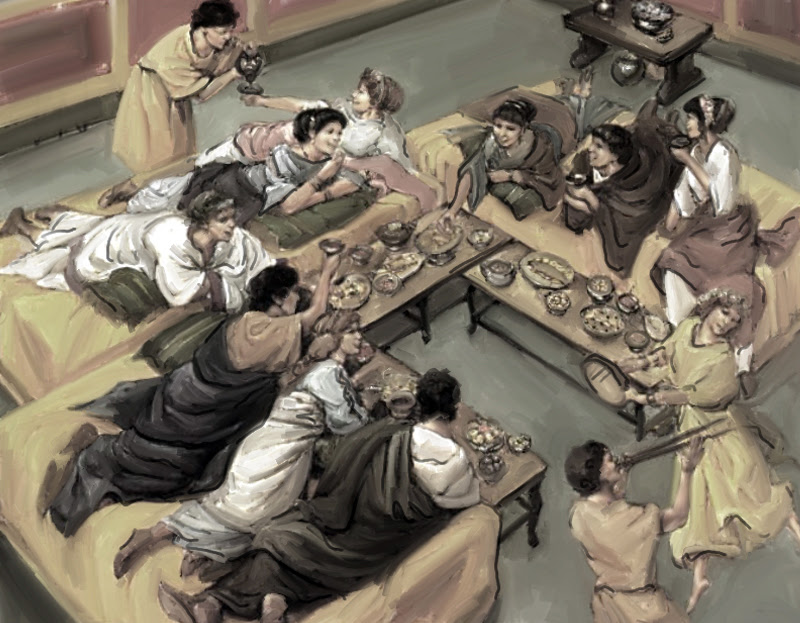 Fast forward to 306 BC Rome.
Three wealthy diners are gathered in the triclinium (special dining room) lying on specially design couches (Lectus triclinaris). Around the table, the mensa, the three diners recline on their lectus and casually eat exotic food brought to them by slaves.
Over a spoonful (cochlear-type spoon with a needle-thin grip, which is also used as a prong to eat snails and molluscs) one of the diners speaks between mouthfuls of lentils imported from Egypt:
Petronius: “Food this good should never be on a dirty peasant’s table. They wouldn’t appreciate the refined flavors.”
Cassius: “Let them eat fava beans, chick peas, and lupins, I say!”
Marcellus: “Let them eat what we deposit in the vomitorium this very day!”
A hearty round of laughter is followed by gulps of imported wine.
The following morning a city-wide slave revolt results in a round-up of wealthy Romans. It doesn’t take long before fava beans and chick peas become Petronius, Cassius, and Marcellus’ favorite (and only) food. 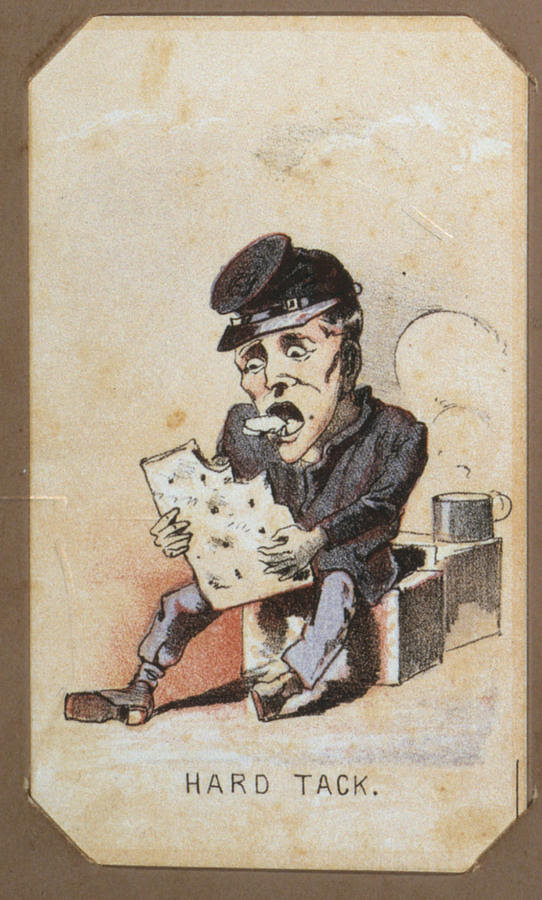 Fast Forward to the American Civil War - 1863:
When on campaign, soldiers were issued rations of hardtack crackers (generally 9 or 10 crackers) when bread was not available, which was most of the time. Some of the common problems with hardtack were being too hard, wet, moldy, or infested with maggots and weevils. If they boiled their hardtack in coffee they could scrape the weevils off the foam.
Grumbling about hardtack was common and there was a popular song called “Hard Times.” The chorus went:
“Tis the song and the sign of the hungry,
Hard crackers, hard crackers, come again no more!
Many days have lingered on our stomach sore,
Oh hard crackers come again no more!”
Soldiers through the ages have complained about rations, and the North and South armies were no different. They did however, exhibit a wonderful sense of humor when discussing their cuisine!

Fast forward to today.
Knock, knock who’s there? Lettuce…lettuce who? Lettuce in and we’ll tell you!”
We eat some pretty weird foods in the good old USA. Sometimes I don’t know if I should chuckle or upchuck. Here are a few examples:
Snake. No it doesn’t taste like chicken. Take it from me. I tried 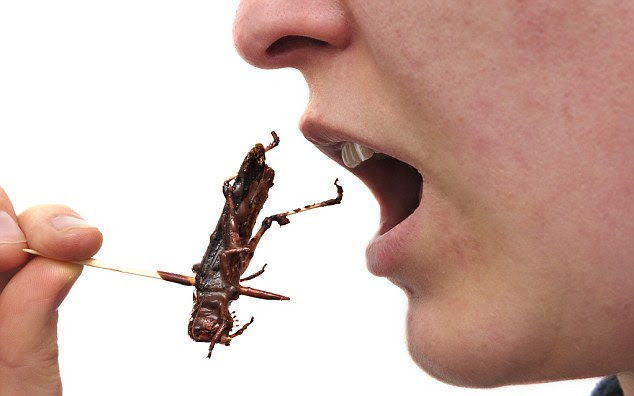 it. Try frog legs, alligator, or even quail, with a gamey seafood flavor. If you really want the whole experience you should catch your snake and cook him up yourself. Just remember to carry some anti-venom in case he’s quicker than you.
Brain sandwiches. Deep-fried calves’ brains can be found in restaurants all along the Ohio River Valley. I read that squirrel brains were a popular Appalachia food for thought. Unless, that is, you get the wrong squirrel carrying a variation of mad cow disease!
A popular Arizona restaurant serves Chapulines, aka grasshoppers. It’s a traditional food in Mexico and is said to taste like grass, hay, or shrimp. That’s quite a spread. Which is it? I’m not really tempted to find out.
“Part of the secret of success in life is to eat what you like and let the food fight it out inside.” - Mark Twain
Time for me to walk on down the road…
Dave Stancliff
at May 02, 2014