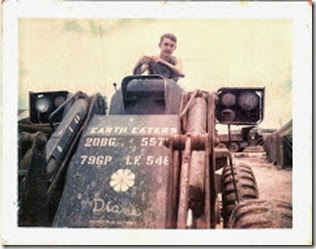 On this day in 1970, my squad was attached to the  1st Air Cav Division and we crossed the border into Cambodia.

We entered the Kampong Cham Province of Cambodia. The operation was known as Task Force Shoemaker (after General Robert M. Shoemaker, the Assistant Division Commander of the 1st Cavalry Division).

Our force attacked the long-time communist stronghold with 10,000 U.S. and 5,000 South Vietnamese troops. Sporadic contact and ambushes happened nearly every day. We lost eight Americans killed and 32 wounded, which was low casualties for such a large operation that wound up by May 3rd.

Unlike in the picture above where I’m sitting on that bucket loader, I walked most of the time and was responsible for minesweeping the dirt roads which were loaded with landmines left by the retreating NVA force. 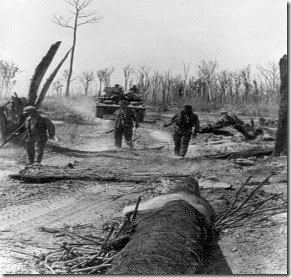 One of the many things I’ll never forget is the ambush that killed my partner, Rogers. It happened so fast it was a blur. I was lucky enough to be able to dive to the ground and crawl for cover without getting hit. He wasn’t.

I remember before we left for Cambodia we both sat down and wrote letters home. He showed me a picture of his wife who was 8 months pregnant. I wrote my sister Margie and told her what I knew about my new mission of going into Cambodia. It’s hard to believe that my letters weren’t censored by the military.

Both of us looked at the upcoming mission as somewhat of a lark. It was easily the biggest operation we’d been in yet. Talking with guys from other units helped keep me informed. Did I fear dying? Listen, I was 19 years-old and was too stupid to think I might die.

So, here I am today over 40 years later, still thinking about that tough time in my life. For some vets, like me with PTSD, there’s anniversary dates that remind us of those times. today is one of those dates.