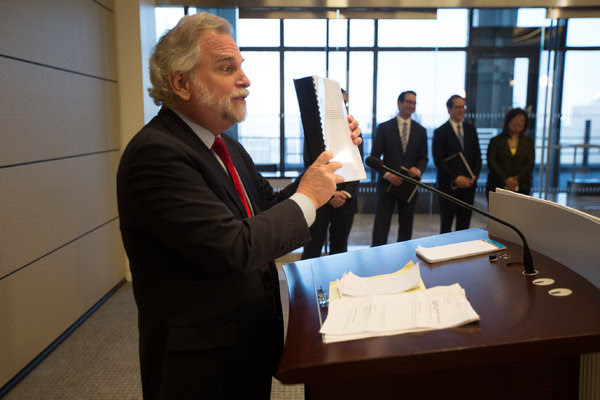 Whitewashing scandals is nothing new in politics.

See the clown (photo) holding up a report? His name is Randy M. Mastro. More on him later.

The recent exoneration of NJ Gov. Chris Christie in the “Bridgegate” scandal is the latest example.

A report that cost the taxpayers $1 million dollars concluded Christie was not involved in the bridge closings, and furthermore, he wasn’t a bully either!

Okay. This controversial report came up just short of suggesting Christie should be canonized. To put it nicely, something stinks in New Jersey politics.

According to The New York Times – March 27:

“The Port Authority official who oversaw the lane closings at the George Washington Bridge said that he had informed Gov. Chris Christie of New Jersey about it at a Sept. 11 memorial while the closings were occurring, according to the findings of an internal investigation released on Thursday by lawyers for the governor.”

The report said that Mr. Christie did not recall any such conversation, and it found no evidence that he was involved in the scheme.”

Okay. But why doesn’t the report say the official lied? Here’s why; Randy M. Mastro, the lawyer who led the internal investigation, explained that:

“The governor recalled seeing Mr. Wildstein,” Mr. Mastro said. He recalled a brief interaction, he said, “but does not recall the specifics of that conversation or the mention of any traffic issue in Fort Lee.”

“The governor points out that the mention of traffic issue in Fort Lee would not have been memorable or meaningful,” he said.

WTF? One moment Christie doesn’t recall (in the same report) talking to the official, and in the next paragraph he says he did…but so what? The information wouldn’t have stuck with him anyway. Really?

“However, the report could not answer one central question: Why?

The plan to close the lanes was orchestrated by David Wildstein and approved by Bridget Anne Kelly, Mr. Christie’s deputy chief of staff until he fired her in January, according to the report.

“Whatever motivated Wildstein and Kelly to act as they did, it was not at the behest of Governor Christie, who knew nothing about it,” the report stated.

No other members of the governor’s staff were involved in the lane closings, the report found.”

Well how about that? Only two people in that tight-knit staff are taking the fall for the political bridge prank. Kinda hard to believe isn’t it? Get this:

“The lawyers were not able to interview Ms. Kelly and Mr. Wildstein — who are currently fighting requests from state investigators to turn over personal materials related to the scandal — raising questions about the internal report’s thoroughness.

Mr. Mastro, under heated questioning, spent much of the news conference defending the internal investigation as both objective and worth the cost to taxpayers.”

I think you ought to know that this internal review was conducted by a law firm hired by Christie. No bias there, eh? Mastro was nothing more than a paid flunky expected to clear Christie – which he did to the 9th degree…and beyond! Check this drivel out:

“The report suggests that Mr. Christie became highly emotional at a meeting in the State House in January when he learned that Ms. Kelly and Mr. Stepien were involved in the scheme, even “welling up with tears.”

The report also sought to vindicate Mr. Christie on the more abstract notion that he fostered a climate of intimidation.”

Excuse me, I got a little choked up there! I hope Mastro was wearing boots after sharing that pile of shit! Guess what? No surprise here:

“The New Jersey lawmakers leading the state inquiry released a statement saying that the report had serious deficiencies, and Mr. Christie’s opponents were quick to dismiss its findings.

“Randy Mastro could have written his report the day he was hired and saved the taxpayers the million dollars in fees he billed in generating this one-sided whitewash of serious misconduct by the Christie administration,” Hoboken Mayor Dawn Zimmer said in a statement.

What we didn't get for that hefty price tag to New Jersey taxpayers were any interviews with the key figures who executed the plan or any insight into why this happened," said Mo Elleithee, a DNC spokeswoman.”

Posted by ImBlogCrazy at 6:15 AM