Tattoo You! New Meaning to Corporate Branding and Addiction 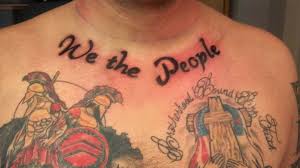 Here’s a column I ran in The Times-Standard newspaper last Spring that attracted readers like bees to honey:

Do you have a tattoo?

Their common these days. A Pew Research Center (PRC) report last May revealed that 1 in 5 Americans have one. It didn’t surprise me. Nearly everywhere I go, I see someone with tats.

That made me wonder what effect all these tats have on our economy? I’d say a very positive one when you consider $1.65 billion was spent on tats in 2012. Research (PRC) statistics show 45 million Americans got tattoos last year (2013).

The rapid growth of tattoo parlors - 21,000 and counting - in America has given the economy a shot in the arm. Can’t argue with statistics. When the total of all U.S. citizens (all ages) have at least one tattoo, you will have a boost to the economy that bodes well for the future.

I’ve looked into the cost of getting a tattoo and it ranges from $45 for a small one, to $150 an hour for large ones. When I see some of the more elaborate tats - full arms, chests, backs, legs, etc., dollar signs start rolling in my head like a slot machine! Some dedicated people, will probably never stop getting tats until they run out of space.

My research shows that 32 percent of people with tattoos say they are addicted to them. There are worst addictions I suppose, but like any addiction, tattoos can be expensive over a period of time. As someone who believes in moderation in all things, I think any addiction is a problem.

There are ways to make money on tattoos, you know. I don’t mean in a circus like the bad old days, but in legitimate deals. I’ve seen examples in recent years where people are paid cash to have a product name tattoo on their hide. Everything from beer to Mike’s Pizza parlor!

The best example of this - and probably the wave of the future - is a business called Rapid Realty. You want corporate branding? The company offers their agents a 15% financial incentive to get the company’s logo tattooed on their body.

There’s no specification where the tattoo has to be. At last report, 44 employees out of a possible 1100 now have company ink forever. It could mean up to an additional $6,000 to $7,000 a month for those individuals! It’s a new program, so give it time. Those numbers are likely to grow.

The boss pays for the tattoo. But what happens to those newly branded employees? Are they considered major suck-ups? Or do they make sure to put their tat where the sun doesn’t shine?

Which brings up the question; how far would you go to get ahead in your job? What if your company offered you a lucrative financial incentive to have their logo tattooed some place where the sun does shine?

Take the case of Billy Gibby of Anchorage, Alaska:

Billy the Billboard, as he’s known, told the local media in March he would tattoo other parts of his body with “sponsored ink” in exchange for the ones that currently cover his face.

I did read about a guy who got his eyeballs tattooed black (4/17) because he was addicted to tattoos. I’m not going to count him here because he lives in Brazil and we’re talking about America. Still, that’s how addicted a person can be.

Grammy-winning rapper Lil Wayne put out a video in 2011 explaining his addiction to ink. He just wanted to be like rapper 2PAC (Tupac Shakur), who was killed in a drive-by shooting. Whatever.
There’s even an Android app called “Love Tattoos” for addicts of all things ink. You can go there for news and views that are updated daily. It’s a great place to get your tat on!

ABC showed a good documentary - My Tattoo Addiction - on March 6th. One of the interesting parts was about home tattoo kits becoming available everywhere. I suspect this will encourage more people to get more tattoos…to the point of addiction. Think about it, you don’t buy the whole kit and just give yourself one tat.

What’s that? You say people could also use that same tattoo kit to give others tattoos? Talk about scary. There’s this little matter of hygiene and infections these newly minted tattoo artists will bring to the table.

As It Stands, in full disclosure I admit that I don’t have a tat. Tattoo you?