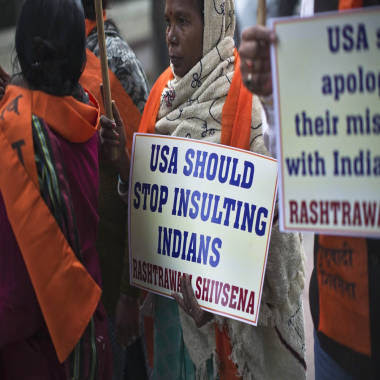 In a very embarrassing situation, an Indian diplomat in New York was strip-searched after being arrested on fraud charges.

The news didn’t go over very well in India whose government immediately retaliated by cutting off the cheap booze and food that American diplomats enjoyed getting.

What surprises me is this has become a big controversy and is causing a rift between the two countries. Things haven’t been so tense since 1971, when Washington sent a carrier group to the Bay of Bengal during the Bangladesh war.

Really? Over an Indian national who was caught breaking the law? Is there more behind this whole incident that we don’t know about? It makes a person wonder.

“India has blocked perks such as cheap alcohol and food imports at the U.S. Embassy after one of its top diplomats was arrested on fraud charges and strip-searched in New York City.

Deputy Consul General Devyani Khobragade has been accused of submitting false documents to obtain a work visa for her Manhattan housekeeper, an Indian national whom she allegedly paid less than $3 an hour.

The 39-year-old diplomat's arrest has sparked a storm between the U.S. and ally India, with lawmakers in Delhi calling her alleged treatment "despicable" and "barbaric."