Cats, rodents, & humans intwined in history - or why a cat will never starve 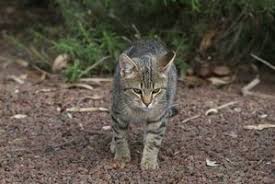 I read an interesting story about a cat, Mazy May by name, that was lost in Oregon for 16 months at a national forest and was discovered by a park ranger who returned the cat to it’s human family.

The park ranger who found the cat said it's amazing she wasn't eaten by a bobcat or a bear and that she survived an entire winter.

Cissy Myers, her husband Ken and their pets went camping at Silver Creek Falls near Silverton, Oregon. At the time, the Myers family said they always took their two cats and their dog camping.They traveled with their pets in the family's tent-trailer because if they didn't, they said, the animals got separation anxiety and stop eating.

But on one of those nights, the trailer wasn't completely secured. "It was not zipped tight and that was the only way she could have gotten out," said Myers. When it was time to pack up and go home, Mazy May was nowhere to be found.

All’s well that ends well, however. But it got me to thinking about how that cat managed to survive. It was domesticated, but apparently had no trouble going feral and eating rodents and other small creatures.

Then I read this story and it all came together:

“A cat-and-mouse game that played out in a Chinese village 5,300 years ago is helping scientists understand how wild felines were transformed into the tame pets we know today.

In fact, it was the cat's appetite that started it down the path to domestication, scientists believe. The grain stored by ancient farmers was a magnet for rodents. And that drew wild cats into villages to hunt the little critters. Over time, wild cats adapted to village life and became tamer around their human hosts.

That's the leading theory, anyway, for how wild cats long ago were transformed and became ancestors of today's house cats. That happened in the Middle East, rather than China. But bones from the Chinese village back up the idea that felines took on the pest-control job in ancient times, says researcher Fiona Marshall of Washington University in St. Louis.” read full story here