When the line between movies & reality blurs –‘Hollywood Stuntz’

I have nothing against motorcycles.

If I was still physically able to ride one, I would, although my wife would probably make me sleep in the dog house located in our back yard!

This is not a rant against motorcycles. What I’m taking issue with today, is an activity involving motorcycles. It’s called “Hollywood Stuntz,” and as the name suggests, it involves doing wheelies and recklessly darting in-an-out-of traffic at extremely high rates of speed.

There’s been a number of incidents this year involving large groups – one out of Utah had over 3000 members who played this deadly game of chicken on their crotch-rockets! The guy who started the group a year ago don’t even go this year out of fear of what could happen with that many motorcycles doing stunts in heavy traffic. 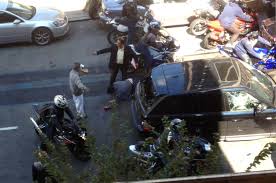 The most recent case involves a group – or gang – of motorcyclists who chased a man and his wife and baby daughter in their SUV. They were fleeing for their lives when the motorcyclists surrounded them and pulled the male driver out of the SUV and nearly beat him to death.

He was beaten into unconsciousness by enraged motorcyclists and would have probably been murdered if a brave civilian onlooker hadn’t stepped between him and his attackers (he was on the ground not moving). 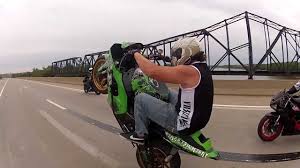 A man who filmed a video of the violent confrontation between an SUV driver and a swarm of bikers during the motorcycle rally in Manhattan has been receiving death threats, his attorney said.

Kevin Bresloff, whose video went viral last week, has been cooperating with police in the investigation, his lawyer told NBC 4 New York. The video has helped investigators identify suspects and piece together the assault. Bresloff's attorney said he began receiving death threats since his identity became known.

Bresloff took a chance airing his video and now he’s on someone’s hit list. what the hell is going on in our society? Reports of three cops on motorcycles (all out of uniform) and riding with the group watching the whole drama without intervening have been coming in! The last one said one of the cops was “deep undercover,” as if that excused him (he could have called 911).

One of the motorcyclists was seriously hurt when the SUV darted away from the motorcyclists during the initial attack and ran him over. He may never walk again. I’m truly sorry for him and his family, but look who he was riding with!

Danger is a game to this new breed of motorheads. They have no regard for innocent drivers trying to stay out of their way. Something bad was bound to happen, and it did. End of story.