Pass the Pus and Feces Please! New law is a good reason to go vegetarian!

I don’t trust companies that regulate themselves.

My reason is simple; companies are in business to make a profit. Anything that hinders the process is frowned upon. Cutting corners is the least of the things that can happen when a trust system is employed for companies to monitor themselves.

What a laugh! The only thing they monitor is the bottom line!

When the USDA was created on May 15, 1862, Abraham Lincoln established the independent Department of Agriculture to be headed by a Commissioner without Cabinet status. Lincoln called it the "people's department." It was designed to ensure food safety among other things.

Something happened over the decades and now the USDA is doing it’s best to foist off food safety onto consumers, and worse, the companies that package and sell the food. Ever hear the one about having a fox guarding the hen house? Foul play!

I resent being driven towards an all vegetable diet, but when I think about the stuff that’s already in our food system and how the USDA is backing off on meat inspections soon … it’s time to reconsider. Here’s why:

Remember in the mid-1990s when USDA began telling people to wash their cutting boards and utensils after preparing meat and always use a meat thermometer? Because US meat and poultry is so full of pathogens, if you don’t kill them they might kill you? 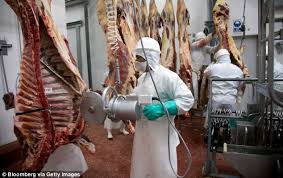 That was the beginning of the government's move to pass food safety risks on to customers, and more distressingly, to meat processors themselves. The move is continuing with new, alarming government efforts to reduce and disempower meat inspectors at slaughter plants and allow private industry to regulate itself.

In 1998, USDA rolled out its pilot HACCP system. The acronym stood for "Hazard Analysis and Critical Control Points" but federal meat inspectors, industry watchers and food advocates quickly dubbed it “Have a Cup of Coffee and Pray” because it transferred oversight from the government to the plant, in shocking, industry-friendly de-regulation. 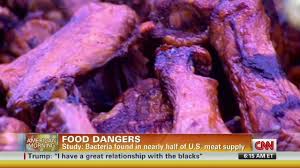 HACCP was supposed to replace meat inspectors' old-fashioned "poke and sniff" method of visually examining carcasses by instituting advanced microbiology techniques. But it is also an "honors system" in which federal inspectors simply ratify that companies are following their own self-created system. As in “Trust us.”

Last week, a coalition of food and worker safety advocates and allies gathered outside the White House to protest USDA's imminent plan to implement HACCP system-wide now that it has been used at pilot locations. "Instead of trained USDA inspectors, companies will police themselves," says the site of the group that organized the protest,  sumofus.org. "

Plants will be allowed to speed up production dramatically. Chickens will spend more time soaking in contaminants (including pus and feces!), and poultry plants are compensating by washing them in with chlorine."

Fecal contamination is not the only risk posed by the new, laissez-faire system. Under the new HACCP/HIMP rules, bruises, scabs, sores, blisters, infections and tumors on chickens will no longer  be considered "Other Consumer Protections" (OCPs) and removed.

Already, when half a bird's body is "covered with an inflammatory process" it may still be "salvaged" for food, says an anonymous poultry inspector who is against the new system.

It is hard to believe federal meat inspection will be further relaxed when it is already widely believed to be a farce. The major chains Red Robin, Applebee's and Outback Steakhouse  have been cited for food poisoning outbreaks. The salmonella-laden Wright County Egg and the Peanut Corp. of America, both of which caused disease outbreaks, were awarded “superior” food ratings by inspectors only months before their products were recalled.

And the Westland/Hallmark Meat company, which contaminated the School Lunch program and caused the biggest meat recall in US history, passed 17 separate audits the same year its products were recalled! Let's loosen the rules? (read whole story here)