There’s No Such Thing as ‘Black Dog’ Syndrome ! 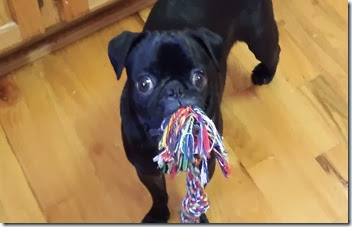 See the adorable little pug on the left? Her name is Molly, and she makes my wife and I very happy. She’s only one-year old and we look forward to having her company for many years to come.

Just look at this little scamp. She’s always ready to play. Yet if you listen to some people, if she were in a shelter her chances of being adopted wouldn’t be as good because she’s black!

That’s right. Some call it puppy prejudice because black dogs are supposedly more likely to be the last picked in an adoption situation. I never heard this before. So I did a little reading.

It’s myth busting time! Don’t believe those sad shelter stories. The ones about black dogs being the first to go isn’t true:

It’s a common story animal welfare workers will share: Black pets are often the last left on the shelter floor and the first to be euthanized. The idea is so pervasive ther

e’s even a name for it — black dog syndrome.

“It’s not news to people who have been in animal welfare for a while that black cats and dogs are a little harder to place,” Brenda Barnette of Los Angeles Animal Services told TODAY.com.

“I think it’s for the very simple reason that they’re harder to photograph.”

Nonprofits have been founded specifically to find homes for black animals, and several shelters across the country have made special efforts to promote the adoption of black animals, from providing them with better lighting to running special promotions.

But despite much media attention and anecdotal evidence from shelter staff, recent research suggests that coat color, be it black, white or brown, has little impact on an adopter’s decision.

“New pieces of research have found that there is no indication that they are less likely to be adopted,” ASPCA Vice President of Shelter Research Dr. Emily Weiss told TODAY.com. “We just conducted a piece of research looking at various traits that drive people to adopt and color did not play a role at all. It busts this myth completely.”

Pet dogs enjoy dog pleasures with the identical good reasons because individuals similar to a number of things like sugary snacks along with candy because pleasures. An occasional deal with really does simply no harm to your pet dog, however as with more than undertaking man pleasures, an excess of dog pleasures may make your pet dog each unsuitable along with unwell Gluten Free

One may consider pet dogs don't know your variation throughout what get into the foods however rather your in contrast, pet dogs know very well what they're feeding on in addition to perform feel the variation when dealt with with particular interest Gluten Free