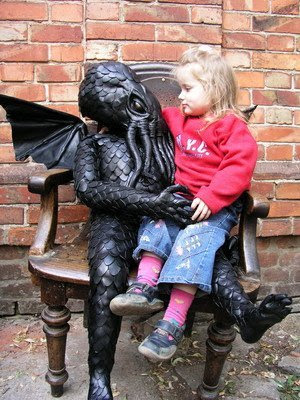 Like most children worldwide, I had an active imagination when I was young.

I use to watch scary movies on television and spend the rest of the night with the light on in my room and wondering what kind of monster might be lurking in the closet!

The little girl in the photo (left) doesn’t look too concerned that she’s sitting on a lap of a hideous H.P. Lovecraft-like gargoyle. Probably because she doesn’t know what a gargoyle is and the sculpture doesn’t move.

I may be wrong, but I think it takes a lot more to scare kids nowadays. They’re flooded with images in our society of monsters and the like via television, games, and movies. 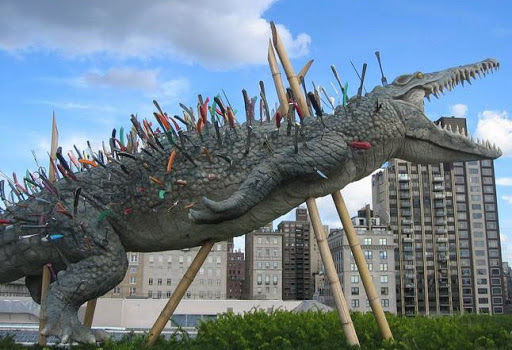 hina, East European Countries, and even in the US - anywhere the grass-roots creativity goes bad and the bad taste gets promoted, often unintentionally.

Don't get me wrong, I'm all for the bizarre stuff for kids, and some of the sculptures here are downright fascinating; but others are... well, ugly as hell.

Not only kids, but some more impressionable adults are in danger to become psychologically scarred from thinking too much about these monsters and letting them into their dreams.