Concussions & Football: Is the risk for your child really worth it?

Football is only rivaled by baseball in popularity. It’s entwined into the very fabric of our society. Children begin playing at ridiculously young ages.

Last year, 3 million kids from the ages of 6 to 14  played organized youth tackle football, according to USA Football. Even some 5-year-olds are in helmets playing in the Tiny Mite division of Pop Warner (which insists that its gladiators weigh at least 35 lb.)

Tomorrow I’m going to watch my 12-year old grandson play football. He’s a defensive end. Because I’m aware of the dangers involved I’m going to be nervous throughout the game – praying nothing happens to him. He wanted to play football. His parents didn’t push him into it.

I use to be a football fan, only recently losing interest in following college and the pro games. I admit it has a lot to do with the research I’ve done on football-related concussion injuries. They scare the hell out of me! I’ve had two serious concussions in my life, and feel lucky to be typing this piece right now. 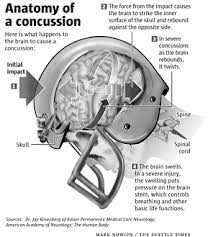 The following articles illustrates what I’m talking about. It’s sad. And it really makes you think:

It was a question with no right answer that tugged heavy at the hearts of Damon Janes' teammates when the 16-year-old died after a hit in a high school football game: Should the season go on?

Should the players rally and play every game for their star running back, whose motto was "Giving up is simply not an option"? Or should the teenagers forget about football and take time to mourn their friend?

The Westfield-Brocton Wolverines' varsity players took a paper-ballot vote and decided that the pain was too great, that their season would end after just two games.

"I wanted to play, I love the game," said teammate Stevie Wisecarver III, a 16-year-old quarterback who has played football since third grade. "But it just wouldn't feel right without him. The team just didn't feel right." Damon took what hospital officials would later describe as a "helmet-to-helmet" hit during the third quarter of Westfield-Brocton's Sept. 13 game against Portville, a 32-6 loss. He was able to get on his feet but lost consciousness on the sidelines. He died three days later at Women & Children's Hospital in Buffalo. 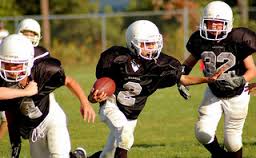 Concern about increasingly hard hits among the 1 million boys who play high school football has brought renewed attention to concussion management and a national initiative to teach the "Heads Up" tackling technique. An average of 12 high school and college players die annually, according to a recent study in the American Journal of Sports Medicine.

Damon's was at least the fifth high school football death this season, but his was the only team to cancel the season because of it. Read whole story here

* The Problem with Football: How to Make It Safer

* Concussions and Our Kids