As It Stands: Let’s face it, common sense is not a common thing

I’m not sure when common sense became a rare commodity in this country. There are always a certain number of people without common sense in any era.

I tend to trace the current epidemic to the infamous hot coffee case against McDonald’s when a woman sued (and won) because she was burned when she spilled a cup of the fast-food restaurant’s coffee on her lap.

This spawned an age where even the most obvious things need to be explained in simple language. “Don’t slide your finger along this new knife,” or “Don’t put your fingers in the toaster” suddenly had to be spelled out for adults.


I don’t know what happened prior to that, but since it became necessary we live without objecting to the simplistic statements that accompany nearly everything we purchase. 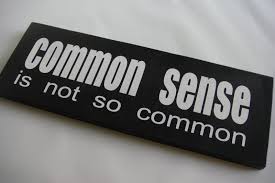 I’m just warming up. One thing that really disturbs me is people who don’t use common sense in the heat. Especially this extreme summer. So far this year there have been at least 21 deaths of children left unattended in vehicles, according to a study from the Department of Geosciences at San Francisco University.

Why would you leave a baby unattended in a car regardless of the temperature outside? Where’s the common sense in that? What are people thinking? I’ve read a lot of theories on the dumbing down of America, but when it comes right down to it many people were already lacking common sense.


Nothing too complicated about that. The people who do have common sense are rapidly becoming a minority. Look at Congress. If there are two senators who have common sense, I’d like to know their names! The ideology driven goons currently taking up space in both houses have forsaken common sense long ago. 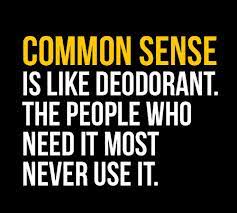 
Common sense should tell people-even children-that TV shows such as "Power Rangers" are not reality. Two eleven-year-old boys, however, tried to re-enact a scene from the above-mentioned show by burying an eight-year-old boy alive in the ground, thinking he would grow back out.


Common sense is defined by Merriam-Webster as, "sound and prudent judgment based on a simple perception of the situation or facts." Thus, "common sense" (in this view) equates to the knowledge and experience which most people have, or which the person using the term believes they do. 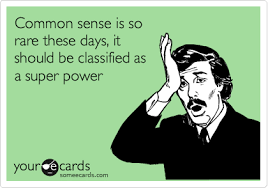 “Common sense is not so common.” according to Voltaire. The problem has been around for a long time and I probably shouldn’t waste my time worrying about the lack of it in our society. Why should I care if people don’t have enough sense to stop texting while walking and end up falling off a pier in broad daylight?


I’ll tell you why I care; every now and then I have to deal with people who have no common sense. It’s difficult not to say something when someone tugs on a door to a restaurant or store with a sign on it that says “Push.”


You know what I’m talking about.


There’s an old Proverb that says “A handful of common sense is worth a bushel of learning.” I’ve found that to be true during my career when I’ve dealt with people who have a masters degree, yet can’t seem to understand how the real world works.


Robert Green Ingersoll wrote, “It is a thousand times better to have common sense without education than to have education without common sense.”

I’ve met people who believe common sense is an impediment to their lifestyle and go out of their way to do stupid things to prove they’re the salt of the earth. They treat common sense like a drone invading their world of make believe.

I grew up believing common sense was a virtue. I still do. I admit I don’t know why so many people who lack it run our government. Perhaps because of voters lacking common sense, who vote for pretty faces adept at rhetoric. It’s a thought.


As It Stands, my favorite artist Leonardo da Vinci - a man of uncommon good sense -said, “Common sense is that which judges the things given to it by other senses.”