As It Stands: When the blind seek to lead again, and again… 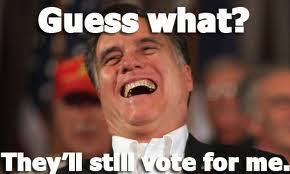 Do you want to know how badly the Republican party is doing after their latest presidential bid defeat?

The man who promised to lead the way for the GOP, and then got his butt kicked thoroughly is back! Mitt Romney’s crawled back under the GOP tent (he’s been hiding out of shame) and he wants another go at the presidency. No really.

What gall you say? Hey, he’s a politician. They can get away with taking pictures of their weiners and still run for office. So, letting Mutt go around and start talking with GOP members again has hardly caused a stir. 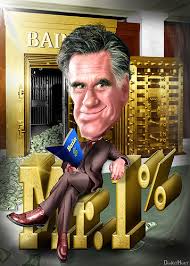 Let’s face it, who else does the GOP have to turn to with any experience in high level politics like running for president? The individuals currently jockeying for position are hardly energizing the Republican base – what’s left of it that is. The party is so shattered that it looks like a tribal war with each faction trying to assert dominance.

With no hope at all of fielding a credible candidate, the GOP is on the verge of once again being led by the blind. Romney didn’t learn his lesson as evidenced by his stubborn insistence to NOT CHANGE anything in the GOP’s message! That, despite his monumental loss and the advice of GOP strategists to court Hispanic and African-American voters.

I suppose it’s the rarified air of being a 1 percenter, but Mutt actually believes people will give him another chance at buying the presidency. Can you imagine the damage Mutt will cause the party if some of the GOP loon toons decide to back him?

If that wouldn’t be a case of the blind-leading-the blind, then I don’t know what would be! Here’s a news snippet about Romney’s attempted resurrection:

“The Presidential election ended almost nine months ago, but Mitt Romney re-emerged Tuesday to continue his fight against President Barack Obama’s policies and assert himself as a Republican Party elder at a time when the party is struggling to find its path forward.

Romney sought to re-establish himself as a force within the GOP with a speech in the politically crucial state of New Hampshire, weighing in on the fractious battles to play out within the Republican Party since last November.Whether Romney's counsel will sway fellow Republicans — including Cruz, who will take his defund-Obamacare message to Iowa this weekend — is another question.” (Story here)