As It Stands: Hump Day topic –The difference between optimists and pessimists 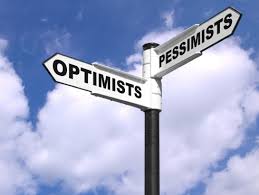 Are you an optimist or a pessimist?

Optimists explain positive events as having happened because of them. They also see them as evidence that more positive things will happen in the future, and in other areas of their lives.

Conversely, they see negative events as not being their fault. They also see them as being flukes that have nothing to do with other areas of their lives or future events.

For example, if an optimist gets a promotion, she will likely believe it’s because she’s good at her job and will receive more benefits and promotion in the future. If she’s passed over for the promotion, it’s likely because she was having an off-month because of extenuating circumstances, but will do better in the future. 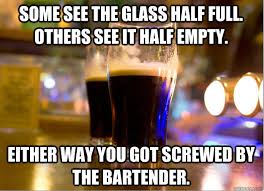 A pessimist would see a promotion as a lucky event that probably won’t happen again, and may even worry that she’ll now be under more scrutiny. Being passed over for promotion would probably be explained as not being skilled enough. She'd therefore expect to be passed over again.

Understandably, if you’re an optimist, this bodes well for your future. Negative events are more likely to roll off of your back, but positive events affirm your belief in yourself, your ability to make good things happen now and in the future, and in the goodness of life. 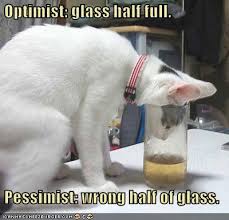 Fortunately for pessimists and realists, these patterns of thinking can be learned to a degree (though we tend to be mostly predisposed to our patterns of thinking.) Using a practice called ‘cognitive restructuring,' you can help yourself and others become more optimistic by consciously challenging negative, self-limiting thinking and replacing it with more optimistic thought patterns.

Posted by ImBlogCrazy at 6:16 AM