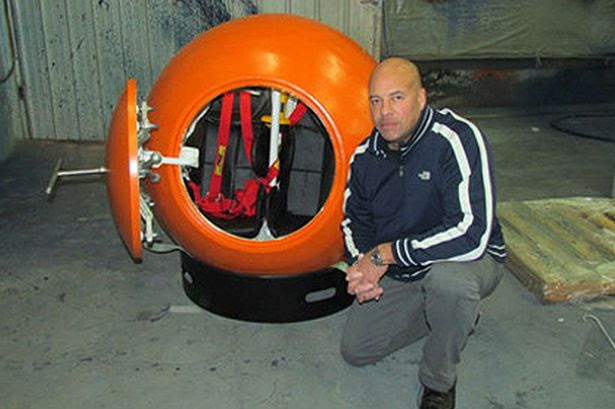 Feel lucky? Today’s topic is about belief and luck.

I want to share a story about one chap, Julian Sharp (that’s him on the left), whose betting his life that his invention can take a person over Niagara Falls safely.

Would you put your life on the line to prove a product you made was safe? For me, it would depend on how badly I needed the money.

A British inventor has made a “tsunami survival” capsule — and plans to test it by hurtling over Niagara Falls in it. Aerospace engineer Julian Sharpe, 50, believes his lifesaving pod will protect people from tidal waves, tornadoes, hurricanes, earthquakes, superstorms and many other natural disasters.

He says he has no qualms about riding the aluminum ball over the world-famous 167 ft. falls. The impact will be like being rear-ended by a car at around 20 mph, he claims.

He said: “We can tell people how strong it is but until we have proved that it has saved a life they might not believe what we say.” Julian, born in Carmarthern, south west Wales, now lives in Seattle. He hopes the capsules, holding up to six people, will sell for between £650 and £3,250. A prototype shown at the Yokohama Expo is to go into production soon. Source