Consumers held hostage at the pumps again! Prices are skyrocketing! 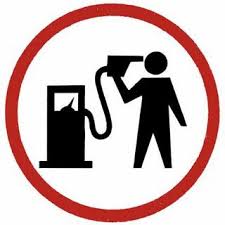 The topic for today is gas prices and how – as usual – we the consumers are being legally raped by the oil corporations and speculators. It hurts. It’s wrong. But it continues to happen and we can’t seem to to a damn thing about it!

It’s that time of year again, when for no real good reasons we get held up at the pumps by the criminals who control transportation costs in this country. It’s like a pre-spring screwing which sets us up for a summer of climbing gas prices.

U.S. gas prices have hit a four-month high with 32 straight days of increases at the pump bringing misery to spring breakers and job hunters.The Automobile Association of America said Monday that the national average for a gallon of regular is $3.73 -- 43 cents more than a month ago -- with prices topping $4 in California and Hawaii. 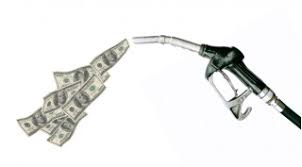 And if you live in Humboldt County like I do – it’s $4.27 a gallon! As usual we lead the nation…and that goes for Hawaii, but it’s like we’re in some Bermuda Triangle and no one can ever explain why we pay more than anyone else most of the time.

I’ve yet to see the mainstream national press examine this little oddity we live with up here. We may be behind the proverbial “Redwood Curtain,” but there’s a lot more inaccessible places in America to deliver gas to. So why are we putting up with it? Locals suspect a lot of things but no investigative reporter has ever tried to get to the bottom of this hard fact.

There’s been some fluff prices done about our high gas prices over the years by various local media outlets, but NO ONE has ever come up with a complete explanation. There’s something rotten all right…and it’s not in Denmark! 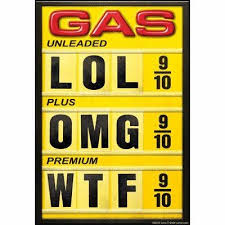 Meanwhile the national media experts blamed a series of the usual bullshit factors for the increase that started in mid-January: (Nod if any of this sounds familiar)

- Some refineries are switching over from winter to summer fuel, which is more expensive to produce.

- A Hess refinery in New Jersey that supplies 7.5 percent of the Northeast's gas is closing.

- Midwinter maintenance has led some refineries to go offline temporarily.

- Demand for gas is up, fueled in part by the return of more people to working.

The price hikes come at a bad time, however, for Americans who are still out of work or facing smaller paychecks because of higher payroll taxes. 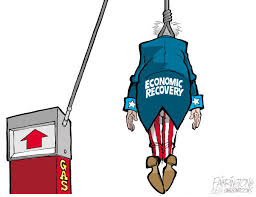 The bad news: according to the AAA prices will likely continue to rise into the warmer months and driving season, but not at the same pace they did in 2011 and 2012. Talk about a Catch 22 – those Americans that have found jobs are paying the price at the pump – and those without are taking a hit they can ill afford.

The sooner we get away from fossil fuels, the better for the average consumer!