AS IT STANDS: Remembering John Steinbeck, a great American writer 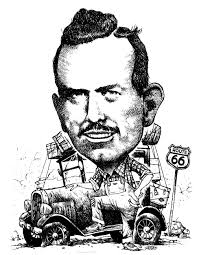 By Dave Stancliff/For The Times-Standard
My favorite author, John Ernst Steinbeck, Jr. has a birthday coming up on Feb. 27th. If he were still alive he’d be going on 111 years-old. I’ve always felt a closeness to him through his books. He told stories ripped from the headlines of the day with a clarity and grace only a great writer could display.
While still in college (1977) I considered writing fiction, and wrote a screen play based on his book “Sweet Thursday.”  My creative writing teacher liked it so much he gave me two addresses to write to so I could ask permission to reproduce parts of the book.
I can’t remember the publishing house that had the rights back then, but I do recall that the second address was that of Steinbeck’s third wife, Elaine Scott. Long story short, rights to the book weren’t available at the time. Scott, however did send me a nice little letter and wished me well. She even thanked me for my service to the country. I had told her I was a Vietnam veteran going to college and I wanted to be a writer. Perhaps when she wrote me, she was thinking about her husband’s two sons by his second marriage who were also Vietnam veterans.
I remember even earlier, when I was a junior in high school (1967), Steinbeck went to Vietnam, to cover the war for Newsday Magazine. He thought it was some kind of heroic adventure and was often 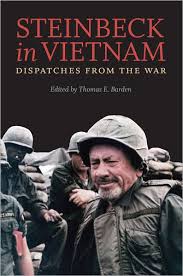 criticized for being a Hawk. Years later he changed his position on the war.
The story goes that while working for Newsday in 1968, he visited one of his sons on the battlefield. In a case of life being stranger than fiction, Steinbeck was allowed to man a machine-gun on a firebase while his son, John Steinbeck IV (1946-1991) and members of his platoon slept.
For more interesting stories about John Steinbeck’s time in Vietnam you can refer to the August 2012 issue of Smithsonian Air & Space Magazine - “Steinbeck’s Dispatches From Vietnam.” (http://www.airspacemag.com/military-aviation/Steinbecks-Dispatches-From-Vietnam-162922976.html.)
Steinbeck’s other son, Thomas (Thom) Myles Steinbeck, also served in Vietnam. He was trained by Armed Forces Radio and Television division at Fort Knox, but when he arrived in Vietnam on the second day of the 1968 Tet Offensive he was immediately reassigned as a helicopter door-gunner.
Elaine Scott’s letter so touched me that I didn’t care about not being able to sell the scree 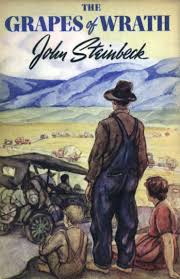 n play adaptation. She was still a link to the man I had  admired since I read “The Grapes of Wrath” in high school.
While in high school I played Lennie in the stage play “Of Mice and Men,”  a drama about the dreams of a pair of migrant agricultural laborers in California. Just four years prior to that, the 1962 Nobel Prize citation called the play a “…little masterpiece.”

There was an irony in his selection for the Nobel prize that most people weren’t aware of until last year. In 2012 (50 years later), the Nobel Prize opened its archives and revealed that Steinbeck was a "compromise choice" from a shortlist consisting of Steinbeck, British authors Robert Graves and Lawrence Durrel, French dramatist Jean Anouilh and Danish author Karen Blixen.
The declassified documents showed that he was chosen as the best of a bad lot. Committee member Henry Olsson wrote, "There aren't any obvious candidates for the Nobel prize and the prize committee is in an unenviable situation.”
Hard to believe isn’t it? One of the greatest of all American authors won a Nobel Prize by default. Steinbeck was controversial in his day for belonging to the League of American Writers, a Communist organization in 1935. 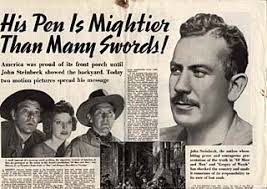 Historians suggest that Steinbeck’s contacts with leftist authors, journalists, and labor figures influenced much of his writing. The Grapes of Wrath is a great example. Some critics found it too sympathetic to the workers' plight and too critical of capitalism but the book and the movie found a large audience in the working class.
“The Grapes of Wrath” was banned by school boards in 1939. Copies were actuall 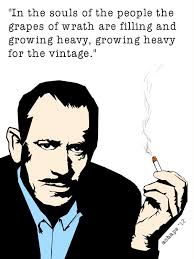 y burned in Salinas on two different occasions. According to the American Library Association Steinbeck was one of the ten most frequently banned authors from 1990 to 2004, with “Of Mice and Men” ranking sixth out of a 100 banned books in the United States.
As far as I’m concerned those are great credentials. Imagine, people are still trying to quiet his voice. It’ll never happen. Not as long as we are free.

While serving as a war correspondent in WW II, Steinbeck sustained wounds from shrapnel and some psychological trauma. The fact that he was able to overcome them and go on has always inspired me. How could it not?
His body of work, twenty-seven books, including sixteen novels, six non-fiction books, and five collections of short stories, will always stand as testimony of the human spirit. Once scorned in the communities where he grew up, he’s now a tourist attraction and proud locals are happy to claim him as a native son.
As It Stands, Happy upcoming Birthday John…