AS IT STANDS: Lack of respect for one another equals fear and violence 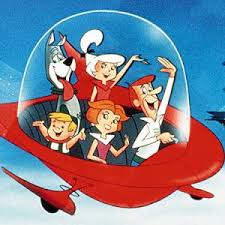 By Dave Stancliff/for the Times- Standard

At the risk of sounding like an old curmudgeon I have to say I don't care much for this new century. The hasn't turned out at all like I imagined back when I was a kid in the 20th Century.

My utopian forecast wasn't even close. Everyone doesn't have a flying car, although I heard some guy has invented one and intends to start production next year. People aren't all wearing space suits like in the popular “Jetsons” cartoons.

We're more apt to see baggy pants exposing underwear on young men, and young women wearing lingerie tops like blouses during the day than space suits. I like that there's no dress code, but have to admit some people look spacey with multi-colored mohawks and rings protruding from noses like metal boogers.

It really makes me sad to see our schools forced to take actions to prevent lunatics from murdering our students. Such a thing was unthinkable back in the 1950s and '60s when I was a child. None of us had to fear someone would walk into our school and shoot us indiscriminately. 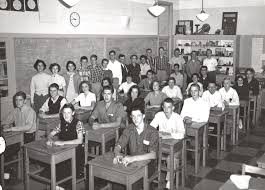 Students may have gotten mad at teachers and peers, but they never returned to school with weapons, bent on bloody revenge. That kind of stuff didn't even happen in the movies.

I'm not sure why. People had guns back then. Plenty of them. I often wonder if people had more respect for weapons then, and also had certain values that no longer exist today. Like respect for authority.

The whole situation about guarding schools continues to get weirder all the time. The most recent surreal news involves Maricopa County Sheriff Joe Arpaio, the self-proclaimed “America's Toughest Sheriff.” He's putting Arizona on the map again by joining forces with movie stars to train armed posse members to patrol schools. Kids will get to see action star Steven Seagal when he trains the posse. No, really.

Arpaio has gathered more than 3,000 volunteers for his armed posse. You'll never guess what other action stars will tromp around these schools in an effort to keep the bad guys out. 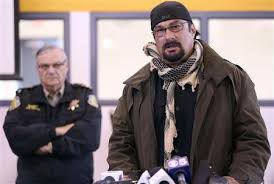 “The Incredible Hulk” star Lou Ferrigno and actor Peter Lupus of TV's “Mission: Impossible,” will be on hand to inspire and sign autographs. Sound surreal enough for you? I can tell you we never came close to this kind of madness back in my day.

I know we have a more violent society now. I suppose you can blame that on numerous factors, but I see the main reason as the breakdown of respect for one another. Instead of becoming more tolerant and evolving into a more peaceful nation, we have become a country of targets for mass murderers and disgruntled students who know no boundaries.

That's because there are no boundaries nowadays. No respect for teachers, professors, judges, police, or anyone in authority. Here's just one recent example:

An 18-year old girl in Miami, Florida flipped a circuit court judge the “bird” on her way out of court and used an obscenity when commenting on his decision. The judge called her back into the court and gave her a 30-day jail sentence for contempt.

However, the next day, after a plea from her , the judge suspended the sentence and sent her on her way free as a bird. What do you think that young lady learned from the experience?

An older person commenting on the next generation's lack of merits is nothing new. Aristotle bitterly complained about the youth of his day being disrespectful, lazy, and without morals or values.

Of course he didn't have to worry about assault rifles slaughtering students in schools. He may have lived in a violent age, but it didn't hold a candle to the 21st Century!

Advanced technologies have not brought us peace. Instead we are turning on ourselves with weapons of mass destruction. For every positive step we've made in medicine we've taken a negative one with increased violence in the workplace and the world around us.

We are regressing as a society, instead of progressing. The result is we're now fighting a holding action against the inevitable collapse of this country from within. Can we turn things around?

As It Stands, perhaps there's hope, but when I see schools patrolled by citizen posses led by aging action movie stars, I have to wonder.

Posted by ImBlogCrazy at 5:23 PM