The topic is there’s nothing new under the sun – or in today’s example – a 100-year old electric car that was converted to run on solar power.

Imagine that? A 1912 Baker Electric car was retrofitted with a solar panel by Charles Escoffery for the International Rectifier Corp. back in 1960.

The panel cost $20,000. With the panel, the Baker could run at 20 mph for three hours. International Rectifier hoped to soon be churning out "noiseless, smogless" solar cars for $5000 each. It's 53 years later now, and still no sign of these classics on the road. Source:Newsweek (Mar 7, 1960) & M3GA.

Of the alternative fuel concepts, the oldest concept has been that of using solar power to drive our cars. The whole concept of solar cars was started in the early 1990’s when emission laws were being enforced all around the United States. Many colleges and universities started looking at the possibility of solar powered cars. But it was soon found out that for cars to run, the solar collectors needed were very large. 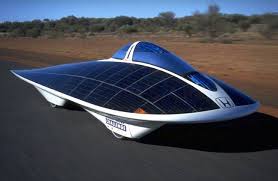 Solar powered cars run on electric power and this electric power comes from the solar collectors. Hundreds of photovoltaic cells are placed in the car and these cells can convert sunlight into electricity. This energy is then stored in solar collectors which in turn feeds the electric motor to run the car. Each photovoltaic cell produces about one-half volt of electricity and hence the need for hundreds of such cells.

The downside is that solar cars would not work properly on cloudy days as they do not get enough sunlight to produce the electricity. Also running solar powered cars during nights is limited and can run until the electricity stored in the battery is exhausted. Having larger batteries to store electric power is possible, but it would mean that there is no place for people to travel in the car.

I’m sure that one day the technology will be feasible, but until it is I’m sticking with Hybrids that use batteries and fuel.

Which is More Efficient, Solar Powered EV or a Biofuel Powered Car?