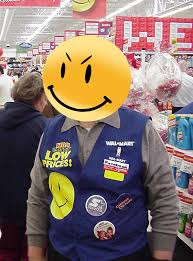 I hope the individuals who ran down the shoplifter at Walmart feel it was worth it to kill for that stolen merchandise. When he was gagging for air under the weight of all three of them (one had a chokehold on him too) I wonder if they thought their actions were going to get them declared heroes? Maybe they thought they’d get a holiday bonus for saving Walmart’s bottom line.

More than likely though, the knuckleheads didn’t think at all. They over-reacted. They stepped over the line and death was the result. I will never condone stealing from stores, but no product is worth a person’s life. Logic was left at the curb with the two DVD players.

VIA THE ATLANTA JOURNAL-CONSTITUTION -

The Black Friday shopping weekend apparently took a tragic turn early Sunday morning when an alleged shoplifter died while being apprehended by employees and a contract security officer outside a Lithonia Walmart.

Two associates who helped catch and subdue the suspect before police arrived have been placed on leave; the security officer who police say may have placed the suspected thief in a choke hold, is no longer working for Walmart.

“No amount of merchandise is worth someone’s life,” Walmart spokesperson Dianna Gee said Sunday in a statement that emphasized that it was early in the investigation into the incident and all the facts were not known yet. “Associates are trained to disengage from situations that would put themselves or others at risk.”

DeKalb police say that the unidentified man took two DVD players from the Walmart at 5401 Fairington Road around 1:30 a.m. The man, who appeared to be middle aged, exited through the front door, but was caught by the trio in the parking lot where a “physical altercation” took place, according to the police report.

When police arrived, they found the trio on top of the man. An officer who handcuffed the suspected shoplifter detected no resistance from him and ordered the employees off. Police found the man to be unresponsive and bleeding from his nose and mouth. Emergency units responded and transported him to DMC-Hillandale Hospital, where he was pronounced dead.

“This is truly a sad situation,” Gee said. “We don’t know all of the facts right now. We’re in the process of working with law enforcement to deterimine all of the facts and cooperating and providing any information we have to assist in the investigation.

The preliminary investigation indicates the victim was placed in a choke hold by the security officer. The cause and manner of death is to be determined by the DeKalb Medical Examiner’s office. A spokesman said no information on the victim would be released until Monday.The two Walmart associates involved in the incident have been suspended with pay pending the outcome of the investigation, Gee said, adding that, “The security officer involved will no longer be providing services to us.”

Time for me to walk on down the road…disgusted