Good Day World!
If you kick-start your day with a glass of grapefruit juice, be careful.
Canadian scientists say the number of common drugs that can interact badly with the tart citrus is climbing, with the potential for dangerous, even deadly, results.
Twenty-six new drugs that can cause serious harm when mixed with grapefruit have been introduced in the past four years alone, bringing the total to 43, said Dr. David Bailey, a clinical pharmacologist at the Lawson Health Institute Research Center in London, Ontario. That’s an average of more than six new drugs a year.
“What I’ve seen has been disturbing,” said Bailey, lead author on a study published in the Canadian Medical Association Journal. “It’s hard to avoid putting a drug out on the market that is not affected by grapefruit juice.”

More than 85 drugs that interact with whole grapefruit, grapefruit concentrate or fresh grapefruit juice have been identified, though not all have serious consequences. Those that do, however, can cause problems that include acute kidney failure, respiratory failure, gastric bleeding -- and worse.
“When I say sudden death, I’m not being sensational,” said Bailey, who said 13 drugs may be lethal when mixed with grapefruit.
The heart drug dronedarone, or Multaq, for instance, has a very high risk of interaction when taken with grapefruit, which may cause a rare form of ventricular tachycardia or rapid heart rhythm, the researchers found.
the prescription painkiller oxycodone with grapefruit can cause serious breathing problems, and adding the fruit to a dose of the popular statin simvastatin, or Zocor, can lead to rhabdomyolysis, a breakdown of muscle fibers that can lead to kidney damage.
To see a complete list of drugs that interact with grapefruit, click here.
The trouble with grapefruit has been known for tw

o decades, ever since Bailey and his colleagues first discovered that ingestion of the fruit with certain prescription drugs can concentrate the medication in a patient’s bloodstream.
Drinking less than a cup of grapefruit juice once a day for three days, for instance, can lead to a 330 percent concentration of simvastatin, the researchers reported.
“I’ve seen a 10-fold increase in some patients,” Bailey said. And it doesn’t matter whether the grapefruit is consumed hours before the pills, the researchers found.
The problem is caused by an active ingredient in some citrus fruits, including grapefruit, limes and pomelos. Even the Seville oranges used in marmalades can trigger it. The fruits produce organic chemical compounds called furanocoumarins, which interfere with a human digestive enzyme.
That enzyme, called CYP3A4, helps metabolize toxic substances to keep them from getting into the bloodstream. Typically, that means the enzyme inactivates the effects of about 50 percent of all medications. Doctors adjust for that when prescribing drugs. 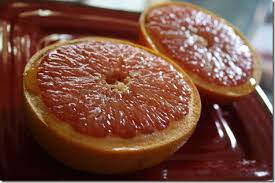 However, when the furanocoumarins in citrus inhibit that enzyme, the drugs can become concentrated in a patient’s system. In some cases, it can be like getting a triple or quadruple dose of medication, Bailey said.
Drugs known to interact with grapefruit do carry warnings, but Bailey said he believes that neither doctors nor patients may take the threat seriously enough.
“Basically, most people are sort of aware of grapefruit juice drug interactions, but I don’t think it’s in the forefront of their mind on a regular basis,” he said.
It’s not clear how many people actually are harmed by grapefruit interactions, mostly because the side effects are often not recognized as being related to the citrus, said Bailey, who included eight case reports in his study. “For every case report, there are at least 100 that have never been reported,” he said.
Part of the concern lies in the fact that people older than 45 are most likely to consume grapefruit juice -- and to take prescription drugs. Seniors older than 70 have the most trouble tolerating excessively high levels of drugs, Bailey noted.

“These are the individuals with the greatest chance of exposure," he said.
Patients worried about the interaction of grapefruit with their medications should talk with their doctors, Bailey said. And doctors should make sure to ask about grapefruit consumption when prescribing drugs.
Some grapefruit lovers may have cut back already because of the risk of drug interaction. Consumption of grapefruit juice has dropped in the past decade, falling from .44 gallons of juice per person per year in 2000 to .15 gallons per person in 2011, according to figures from the Florida Department of Citrus.
Officials there say that although some drugs do interact with grapefruit, most do not. In most cases, doctors can prescribe drugs in the same class that don’t interact, noted Karen Mathis, a department spokeswoman.
“These medications often can provide the same therapeutic effect with no need to avoid grapefruit juice,” she said in a statement. And not all citrus poses a problem, Bailey noted. Sweet oranges, such as navel and Valencia varieties, don’t contain the damaging compound.
“You have an alternative there,” he suggested. “If you want to take your medications with orange juice, you’re home free.” (Source)
Time for me to walk on down the road…
at November 29, 2012