‘Gag me with a spoon!’ Even Nurses Have Their Moments and Hurl 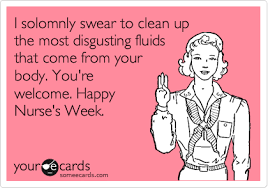 My wife calls me a big “wuss” when it comes to my dealing with certain smells. Since I tried changing our first son’s diaper and upchucked on him and everything nearby she has had to assume the smellier details of our lives.

Every time I tried to help clean up the dog poo, I made more of a mess! It wasn’t pretty, and the reason I gave up trying to help her.

If the garbage really stinks – like rotting fish for example – I have to take a deep breath, pinch my nose with one hand and run outside swinging the plastic trash bag at my side until I can toss it into the steel outdoor trash can. If the weather’s bad, this is really a sight to behold – especially if I slip and have to clean up the mess! (Yes, it’s happened)

I shouldn’t feel so bad however. Even nurses can’t take certain sights and smells without vomiting like dogs! Or me. We all have our trigger point it seems (okay I have a half dozen!) when it comes to things that induce us to hurl the contents of our guts. 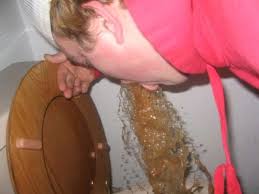 “The triggers span green, brown and all the vibrant colors of the digestive rainbow. Sudden squeamishness is prompted, for some, by fountains of phlegm and, for others, by certain fragrant excretions.

In the profession, it’s often just called “the one thing” -- that single human function or unappealing appendage that can instantly disgust and distress seasoned medical professionals who otherwise handle all sorts of discharges, emissions and oozing with barely a wince.

“Even though very little in the way of bodily fluids bother me, I do have one thing that sparks the heebie-jeebies,” said Barb Dehn, a women’s health nurse practitioner who has often lectured at Stanford University.

“Despite years of attending births with gushing amniotic fluid, blood and other slimy secretions, doing gynecologic exams on sex workers, and changing dressings for people with gangrene, the one thing that makes me gag is … wait for it … the sight of dentures in a glass. No kidding, I can't stand it and begin to retch every time,” said Dehn, who works at El Camino Hospital in Mountain View, Calif. 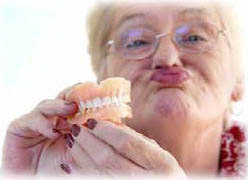 “When I was caring for some elderly relatives, I could do everything else: change diapers, change oozing dressings, give enemas. But brushing their dentures was just too much for me. Go figure.”

Ask 10 nurses the same question – what is your “one thing?” – and you may hear 10 different answers.

Warning for the easily grossed out: This is stomach-turning stuff.

For Terry Ann Black, who spent 46 years nursing in Vermont and Maryland, it’s “anything having to do with the eyes,” including punctures and foreign bodies.

“Why do eyes bother me? Not really sure, but I think I am afraid that something will gush out of them,” said Black, author of a “Caring is Not Enough,” an end-of-life planning workbook. “I also had a recurring patient who had a fake eye and he would pop it out just to get a reaction. I accommodated him.”

For Sandy Navalta, a certified in San Francisco, the problem is way at the other end. 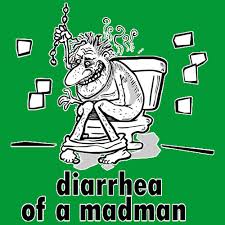 "The one thing that absolutely grosses me out are situations where a patient has been constipated for days. When the patient is given a stool softener, what comes out is three days of hard stool followed by projectile diarrhea,” Navalta said. “And that diarrhea flows down the leg and into the cast, if the patient is wearing one – and, yes, that has happened to me. I've had to clean it up.”

And for Deonne Brown Benedict, a family nurse practitioner and owner of Charis Family Clinic in Edmonds, Wash., the human juice that makes her woozy her is something with which many of us also struggle.

Her impetus is vomitus.

“I almost didn't become a nurse because I figured I might come in contact with vomit more than once in my career. Thankfully, it hasn't been as frequent as I had envisioned,” said Benedict, who has invested 17 years in the medical profession.

She vividly recalls an early, nursing-student moment when one of her first patients began to hurl. As the woman upchucked, Benedict tossed her an emesis basin, “and went running out of the room so that I wouldn't be the next person to lose it,” she said.

“I happened to see a group of eager medical students looking for a good ‘case study,’ so I pointed them right to my patient. They went right in, probably wondering what had happened to the nurse on duty.” Benedict “recovered,” she said, from her guilt and her own wave of nausea and forced herself to “toughen up in this area.”

At least in terms of cookie tossings, some people gag when they see others vomit because it’s believed that mirror neurons in their brains make them more empathetic and cause their bodies to emulate what they see. Like forming tears when you see someone crying, experts say.

Following similar logic, Stanford lecturer Dehn theorizes that many nurses have varied causes for their on-the-job cases of the cold sweats because they all are wired differently, and have had distinct life experiences that they can't check at the examination-room door.

She points to the brain’s limbic system, which help control the body’s reactions to and actions during perceived moments of self-preservation.

“In my own opinion, it must derive from an imprinting that occurs early on in life, and that there are neural pathways that get laid down early and maybe get reinforced throughout life,” Dehn said.

This may explain w 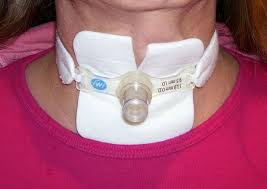 hy Becki Hawkins, a nurse who worked for 30 years in oncology and hospice in the Tulsa area, sites just one aversion when it comes to hands-on human care.

“Not the blood, not the open wounds, not the poo, not the body odor, nor the feet,” Hawkins said.

“The only thing that would really make me scoot out of a room real quick was,” she added, “when a tracheotomy patient would cough up a huge, green ball of phlegm into my face – accidentally and without warning.”

Let's be honest, though, that's going to make pretty much anyone scoot.” (Source)