There’s No Accounting For Taste: From Monkey Toes to Rodents, People Will Eat Almost Anything 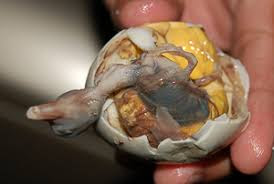 When it comes to what I’ll eat, I’m not much of an explorer. Blazing culinary paths will never appear on my bucket list. I’ve got too sensitive of a stomach! The only time I ever went outside the box when it came to food was when I ate a bowl of fish head stew in the highlands of Vietnam with a group of indigenous people called Montegards. I couldn’t refuse out of courtesy, but I can still see that partial fish head’s eye staring at me in my nightmares!

Every culture invents a food that is weird or disgusting to outsiders. These strange foods are cultural markers to show who's a member (insiders like it) and who's not a member (outsiders hate it.) Maybe a kid ate first it on a dare. They pass it on to the next generation. Then they nudge each other and laugh when outsiders gag.
For example, many cultures pride themselves on their foul-tasting local drinks, such as white lightning, pulque, chong, retsina, and so on. You're accepted if you drink it. There's stuff like Balut – see photo - that is normal fare for Filipinos that makes most Westerners cringe.

PART I : Some examples  from Mammals:

Borewors
(South Africa)
Borewors - sheep,pig,cattle intestines stuffed with meat and offcuts, spiced with herds and cooked on an open flame (barbeque) and served as a meal or snack.

Pig Blood
(Hungary)
Pigs blood with eggs. In Hungary, it is a big deal to kill the first pig of the season. So there I was in the morning watching some of my co-working chasing a pig around in the back yard. they caught it, slit it neck, and colleted the blood in a frying pan and then added scrambled eggs.

Nutria
(USA Louisiana)
Nutria are large semi-aquatic rodents indigenous to South America... In the 1930's nutria were imported into Louisiana for the fur industry and were released, either intentionally or accidentally into the Louisiana coastal marshes. Nutria have caused extensive damage to Louisiana coastal wetlands due to their feeding activity. Due to this damage, officials in Louisiana are now promoting Nutria as a food source, even posting recipes. From what I've heard, they don't taste good enough to eat. www.nutria.com

Biltong
(South Africa)
Animals ranging from cattle to wild animal - springbok, eland or even elephant, get cut up into strips and hung out to dry. Once it is dry it is ready for consumption. National snack for all rugby supporters.

Squirrel Brain
(US South)
Yes, the brain of the small tree climbing rodent. You cook the head with the rest of the body (after cleaning of course), then, using your fingers and a fork, you crack the skull open and dig the brain out. Tastes kind of like mushrooms to me.

Salo
(Ukraine)
Salo is pig fat stored in vats and eaten cold, either raw, smoked, fried or boiled. I guess you could compare it to fatback. It's a delicacy over there. Making fun of the invasion of Snickers bars since the fall of the USSR, the Ukrainians jokingly call chocolate-covered salo "Ukrainian Snickers." Worse yet, some enterprising (?) Ukrainian somewhere decided to actually market the stuff! (http://news.bbc.co.uk/2/hi/europe/3825221.stm)

There’s nine more categories of weird food that I’ll share in the coming months that will either delight or disgust you! Stray tuned.