Hi, my name is Dave and I’m addicted to basketball…and the Lakers 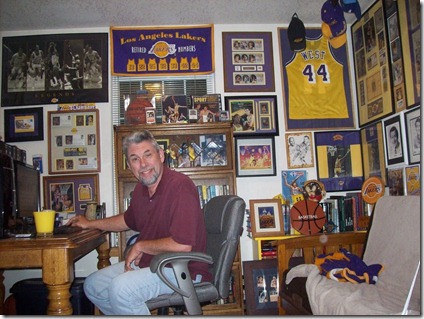 Hi, my name is Dave and I’m a sports fan. A Laker fan to be specific. I’ve had this affliction since the tender age of eleven when the Lakers moved to Los Angeles from Minnesota prior to the 1961 season.

I admit to having too much memorabilia, but I enjoy collecting. It’s even more fun when friends and family buy me Laker related items. What can I say?

Basketball has always been my favorite sport. I love playing it and watching it. I know. It’s a mindless pursuit and probably killing brain cells daily…but I can’t help myself. I just recently gained access to an indoor gym (joined a health club) and getting back into my “shooter’s zone.” I’m so slow it’s like watching someone in slow motion, but as the days turn to weeks and months I hope to improve my speed and agility. I think I have a little left in the tank at 61 (soon to be 62).

So…no surprise I’m following the NBA Playoffs. When the Lakers finally got their act together and beat the Denver Nuggets on Saturday I was finally able to exhale. I think I would have enjoyed getting a colonoscopy over watching Game 5 and 6 when the Nuggets made the Lakers look lame. Despite my outright bias for the Lakers I can’t realistically see them getting past the Oklahoma Thunder (the 7-game series starts tonight).

That doesn’t mean I won’t be hoping for a miracle. If the Lakers “Bigs” show up, the team won’t have to resort to the do-or-die Kobe show. I know Kobe is great, but he’s going to have to accept the Lakers can’t win this series if he doesn’t pass the ball. A lot. As in taking half the usual amount of baskets and playing tougher defense.

There’s other factors that give me hope like Steve Blake’s 3-point shot coming back (5 in game seven), the defense off the bench from Jordan Hill (even some scoring), Matt Barnes slashing style of defense has been effective, and Ramon Sessions is still coming into his own and giving the Lakers some speed at the point. Finally, you can’t discount what Metta World Peace brings to the court. Toughness. I just hope he can restrain himself from any more stupid things like giving his opponents concussions!

The odds makers barely give LA a chance in this series. That’s fine with me…I really love underdogs!!!

A brief history of the Lakers:

Founded in 1947, the Lakers are one of the NBA's most famous and successful franchises.

The Minnestota Lakers came to Los Angeles prior to the 1961 season, making the Lakers the NBA's first West Coast team. The Lakers did not change their name after this move. Now you know why they’re called the Lakers despite the fact California is not know for it’s many lakes.

Besides the relocation to Los Angeles, a second big change to the team was the addition of point guard Jerry West. A third was the hiring of West's college coach Fred Schaus to helm the team, and a fourth was the post-season addition of Francis Dayle "Chick" Hearn as the Lakers' play-by-play announcer. Hearn would go on to hold that post for the next 41 years.

The new Los Angeles Lakers improved on the previous year's results before losing once more to the Hawks in the Western Conference Finals. The duo of Baylor and West proved to be lethal and they both finished among the NBA's top 10 scorers for the next four years.

The Lakers now play at Staples Center a multi-purpose sports arena in Downtown Los Angeles that opened on October 17, 1999. Adjacent to the L.A. Live development, it is located next to the Los Angeles Convention Center complex along Figueroa Street. Staples Center is one of the major sporting facilities in the Greater Los Angeles Area.

Posted by ImBlogCrazy at 8:21 AM