Time to re-write the history books: Pyramid discovered in Bosnia-Herzegovina is older and bigger than Egypt’s Great Pyramid 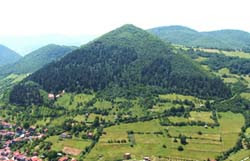 I think this is pretty exciting stuff. I’m very interested in ancient aliens mingling with our earliest civilizations.

It’s a fascinating subject and if you’d like to read more about it check out:

“Chariot of the Gods” by author Erich von Däniken or go here for History Channel episodes.

“A pyramid has been discovered in Bosnia-Herzegovina that is larger, older and more perfectly oriented than Egypt’s Great Pyramid of Giza. Located near the city of Visoko, not only is it the first pyramid to be discovered in Europe, but it is also the largest valley of pyramids in the world.

Its discoverer, Dr. Semir Osmanagich, has also identified pyramids in Asia, Africa, North America and even islands such as Mauritius and Tahiti. He believes these man-made structures are so similar that they prove there was communication during ancient times over vast distances. “Our history books must be re-written,” he said.

The pyramid in Bosnia-Herzegovina has been dated at over 12,000 years old, and it also features the largest complex of underground tunnels ever discovered.

Dr. “Sam” Osmanagich has been admitted as a Foreign Member of the Russian Academy of Natural Sciences in Moscow. He established the Bosnian Pyramid of the Sun Archaeological Park, a non-profit organization to excavate and study the pyramid site further. He also is the author of Pyramids Around the World, Civilizations Before the Official History and The World of the Maya. Now a resident of Houston, Texas, Dr. Osmanagich is in the process of scheduling lectures in the U.S. for later this year.

Dr. Osmanagich will be one of the featured speakers at the third International Scientific Conference on Bosnian Valley of the Pyramids, being held September 4-14, 2012. Admission to this special program is now available from Body Mind Spirit Journeys.” Bosnian Pyramids Conference and Tour

Posted by ImBlogCrazy at 4:29 PM