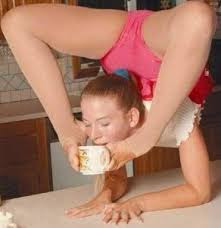 While slurping my morning cup of Joe I ran across the following article about coffee drinkers having a lower risk of type 2 diabetes. It’s news to me,  but apparently old hat to some in medical circles. Now scientists say they know why that is.

What I do know about coffee is that I have to have it in the morning or I’m a zombie for the rest of the day. Coffee drinkers are very dedicated folks and we’ll drink coffee anywhere in any position (see photo left).

I’m just glad they didn’t find out coffee drinkers get some horrible disease after drinking it for enough years. Drink up caffeine lovers, it’s okay!

“Scientists have long known that coffee drinkers have a lower risk of developing type 2 diabetes, but researchers out of China may have figured out why. 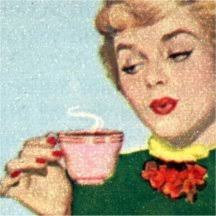 Researchers Ling Zheng, of Wuhan University, and Kun Huang, of Huazhong University of Science and Technology, have found that compounds in coffee inhibit hIAPP (human islet amyloid polypeptide), a substance linked to diabetes. Their study appeared in a recent issue of the Journal of Agricultural and Food Chemistry.

Prior global epidemiological studies have shown that those who drink four or more cups of coffee a day have a 50 percent lower risk of developing type 2 diabetes, the most prevalent type of diabetes accounting for 95 percent of all cases. Every additional cup reduces the risk by an additional 7 percent.

Scientists looking for ways to prevent diabetes have been investigating ways to block hIAPP, which is present in high levels in the pancreases of those with the disease. Zheng and Huang decided to study whether coffee was doing that.

They analyzed the effects of the major active compounds in coffee, including caffeic acid and caffeine, on hIAPP, and found it inhibited hIAPP significantly. "These findings suggest that the beneficial effects of coffee consumption on type 2 diabetes may be partly due to the ability of major coffee components to inhibit the toxic aggression of hIAPP," the authors concluded.

"A beneficial effect may thus be expected in regular coffee drinkers," they said.”

This is very great thing you have shared with us. Now I found enough resources by your tips about this issue, Thank you.