Okay…when was the last time you tried something new? 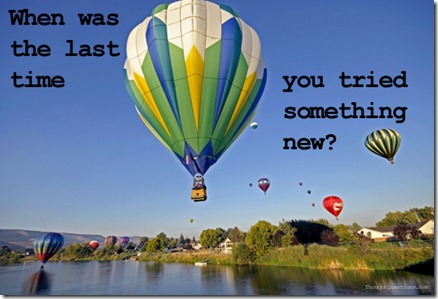 Have you got a Bucket List? Remember that great comedy with Jack Nicholson and Morgan Freeman who were supposed to be two terminally ill cancer patients who decide to break out of the hospital and live their last days to the fullest?

My wife has been checking off her bucket list items at a pretty good clip lately. I, on the other hand, don’t have a bucket list. I’ve lived such a full life that there’s nothing I haven’t done…that I wanted too that is.

Maldives is a country of almost 1,200 islands about 300 miles from the southernmost points of India and Sri Lanka.

The Angola Prison Rodeo is a chance to see serious felons testing their mettle against serious livestock. It's a glimpse into an infamous lockup, bordered on three sides by the Mississippi River, where blues musician Leadbelly once did time. It's an introduction, amid plenty of homegrown food and music, to the peculiarly tangled history of public incarceration and private enterprise in the Tunica Hills of rural Louisiana. The Louisiana State Penitentiary at Angola, once labeled the bloodiest prison in America, holds about 5,200 inmates and sprawls across 18,000 acres in West Feliciana Parish, 137 miles northwest of New Orleans and about 20 miles northwest of St. Francisville, La.