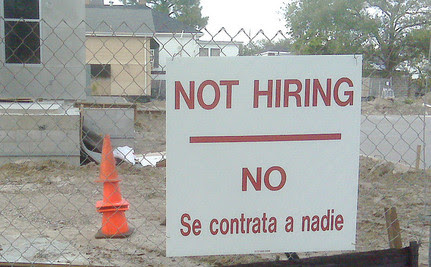 This article illustrates why people think Tea Party members are only interested in their ideology and extreme partisan politics. The people (the 99% ers) come in last with the Tea Party set.

Even for Tea Party standards, encouraging employers not to hire people in this terrible economy to make some vague and stupid point, is anti-American and shows their true colors.

As long as Congressional Republicans put off any chance for relief for unemployed citizens, the deeper the depression becomes. I prefer to to go by what Republicans do, rather than what they say, as the two are usually different. Here is a perfect example of what extremes these wackaloons will go:

“Congressional Republicans have acted shocked and offended at Democrats’ suggestions that they are intentionally sabotaging the economy to try to win back the White House in 2012. Republicans have refused to pass President Obama’s jobs plan — which experts estimate will create at least 1.9 million jobs — and proposed an alternative plan that Moody’s says “will likely push the economy back into recession.”

In a rambling letter titled “Call For A Strike of American Small Businesses Against The Movement for Global Socialism,” Brookstone urges businesses “not hire a single person” to protest “this new dictator”:

Resolved that: The current administration and Democrat majority in the Senate, in conjunction with Progressive socialists from all around the country, especially those from Hollywood and the left leaning news media (Indeed, most of the news media.) have worked in unison to advance an anti-business, an anti-free market, and an anti-capitalist (anti-individual rights and property ownership) agenda. [...]

I, an American small business owner, part of the class that produces the vast majority of real, wealth producing jobs in this country, hereby resolve that I will not hire a single person until this war against business and my country is stopped.

Brookstone cites Democrats’ support of the Occupy Wall Street movement as proof that Obama, media elites, and the like are “against business, private property ownership and capitalism.” Although she fails to explain how a freeze on hiring would send a bold pro-business message, given that such a boycott would further damage the economy and exacerbate high national unemployment.

But these Tea Partiers are only too happy to put politics ahead of the well-being of 14 million unemployed Americans, not to mention the businesses who are looking for qualified workers”"

This post was originally published by ThinkProgress.Written by Marie Diamond