As It Stands: Reflections on Haunted Houses…

It seems like every Halloween someone gets seriously injured in a “haunted house” sponsored by various organizations. Here’s the first case I ran across this year which took place at the Creepyworld house in Fenton, Mo., a St. Louis suburb, last night.

Speaking of haunted houses, the Coast Guard won’t be sponsoring one here in Humboldt County this year. Not because of past problems, quite the contrary it was a successful fund-raising event, but because of cutbacks in the Coast Guard’s budget. It’s hard times everywhere.

Personally, I’ve never been interested in going to them. I went once, back in 1974, with my wife who was pregnant with our first child.

The haunted house was at Knotts Berry Farm and only a ten minute drive from where we lived. In retrospect, it seemed like a stupid thing to do, but she insisted on going, and I quit arguing with her about anything (I lost every time) during her pregnancy.

To make a long story short…I stayed up with her all night. The good news was that she wasn’t so shocked or horrified that it caused a problem (she still had five months to go). The bad news is I had to go to work the next morning. 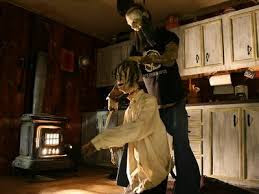 When I was in elementary school my family lived in a house in El Monte, California, that was haunted. I’m not kidding you. Even my parents felt it was haunted. We only lived there for four months and we moved! The rumor in the neighborhood was that the prior resident had killed himself and his wife there. Too many strange things happened to all of us – my two sisters, brother, and father and mother in the short time we were there. I still get the creeps when I think of that place.

My wife and I never bothered taking our three sons to a haunted house, but they all went on their own when they hit their teen years. Showing my generation gap, I once asked one of them if he went to get scared with his buddies?  He looked at me like I was crazy and said, “Dad…I take a girl with me because I know she’ll get scared and want me to hug her!”

As It Stands, I think our economy is more scary than any old haunted house!

Posted by ImBlogCrazy at 3:41 PM