No Surprise Here Department: it’s not safe to drive with animals loose in the front seat 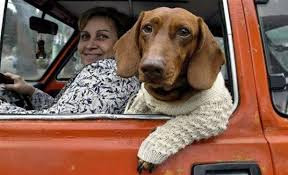 Who would have guessed? For years I’ve watched people driving around with animals on their laps, usually small dogs, and wondered what the hell were they were thinking?

Did they think “it was cute” and no harm would come from having a jacked-up Wire Haired terrier between them and the steering wheel? Or, was it a case of “separation anxiety” on the pet owner’s part? I never wave at these drivers (I figure they’re already distracted enough), but I admit that I often make a circular motion with my finger alongside my head.

Author Stephen King suffered several broken bones and a collapsed lung in 1999 when he was hit by a driver who claimed he was distracted by his dog.