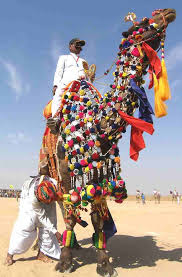 Turkey's annual Selcuk camel fighting championship was hoping to draw spectators from an increasingly modern population and keep the struggling sport relevant with the addition of a beauty pageant, The Wall Street Journal reported today.

Chariot, a 1,500-pound, single-humped camel with spittle hanging from his lips and pompons in his tail, recently won the first-ever beauty contest at Turkey's prized camel fighting competition.

Recently, there was a popular trend for naming camels after political leaders. Four years ago at Selcuk, George Bush fought Saddam Hussein. They tied.