New governor: Non-Christians 'not my brother,' 'not my sister' 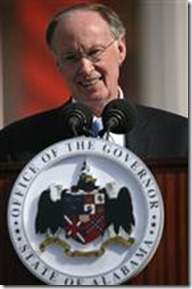 This grinning idiot (Gov. Robert Bentley – left) is a perfect example of the Christian Right’s intolerance in the name of God. How fair do you think he’ll be to non-Christians during his administration?

“Alabama Gov. Robert Bentley told a church crowd just moments into his new administration that those who have not accepted Jesus as their savior are not his brothers and sisters, shocking some critics who questioned whether he can be fair to non-Christians.”