Trump and Other Right-Wingers Ignore 911 Ceremonies 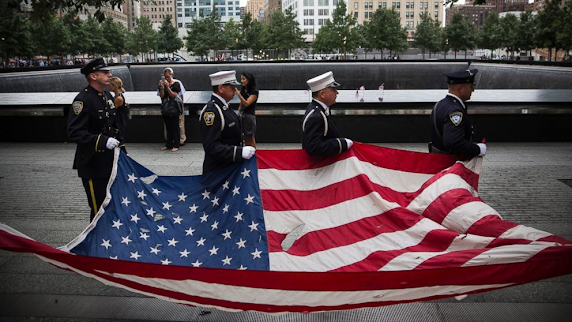 While most of the nation mourned the loss of 2,977 Americans on Sept.11, Trump and other right-wing toads ignored it.

While family members recalled the names of loved ones lost, Trump was slathering on his orange makeup in anticipation of his gig as a color commentator for a fight in Hollywood, Florida last night.

The "fight" was a joke starring 58 year-old Evander Holyfield fighting a MMA retiree Victor Belfort. Trump's stupid oldest son Don Jr. was also there hinting that his dad knew a lot of secrets about aliens and Area 51.

The farce ended in the 1st round. It was an event where everyone involved should be ashamed of themselves.

As crowds gathered in New York and Pennsylvania to honor the dead, right-wing lunatics held a "We the People Reunion" rally in Kentucky.

The event featured the whose who of extreme right-wingers in America, hosting speakers like the MyPillow guy Mike Lindell, Michael Flynn and Pastor Greg Locke.

Promoters expected crowds of around 10,000 people, but a local news station reported less than 300 people showed up for the alternative reality event.

Right-wingers were furious that former President George Bush passionately spoke about threats to America today with a thinly veiled reference to the Jan. 6 insurrection and homegrown terrorists.

"We have seen growing evidence that dangers to our country can come, not only across the borders, but from violence that gathers within," Bush said in a speech marking the anniversary at the Flight 93 Memorial in Shanksville, Pennsylvania.

In a day that should have united all Americans it didn't. Twenty years ago it did, but now we face an even more dire threat from within.