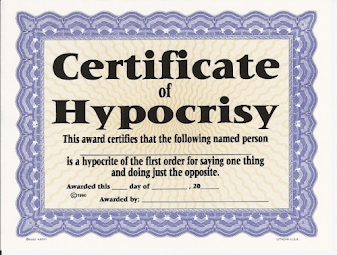 The September candidates vying for this months Biggest Hypocrite award are legion.

The contenders - all politicians or political activists {as usual} - have been summitting videos to a panel of three judges since the start of the month.

With under two weeks remaining, I expect to see a steady tide of hypocrites entering right up until Sept. 30th.

Program note: This year a new Group Category has been added.

As of this post, the most hypocritical Group is 12 Republican Governors who are fighting-COVID-19 vaccination mandates, despite mandating other vaccines.

--Lindsey Graham, last month's winner, is looking for a repeat with accusations that Biden should never have left Afghanistan. It's a complete reversal from his past position, making him a strong contender.

--Mike Pence, continues to kowtow to Trump by being outwardly supportive of him, but in reality Pence is putting together a presidential campaign that would challenge Trump if he did run in 2024.

--Ted Cruz is an accomplished liar, but it's his hypocrisy about Afghanistan, his ill-timed trip to Cancun while his constituents froze their asses off during a major power outage in freezing conditions, that make him a viable candidate.

--Kevin McCarthy, could give a master class in hypocrisy. Thus far his tour-de-force was flip-flopping on Trump's accountability for the Jan. 6 insurrection. This month McCarthy, who is vaccinated, fired off a Twitter message opposing vaccine mandates.

The winner will be announced on Oct. 1st. It should be interesting to see if any of the candidates can crack the top 4 before the end of this month.

The master of ceremonies will be legendary hypocrite Newt Gingrich.