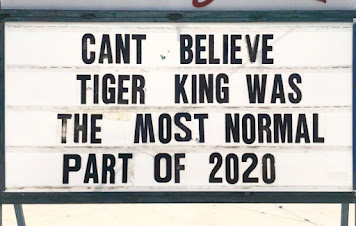 Historians will someday agree that 2020 was a unique year full of challenges without comparison.

The year started off with the whole West Coast on fire, and a deadly pandemic that swept through the country taking lives in record numbers.

In an effort to stop the spread the nation had to shut down causing economic hardships not seen since the Great Depression.

Despite knowing how deadly the coronavirus was in early January, Trump downplayed the "Kung Fu Virus" and mocked masks when healthcare professionals cautioned they were vital (along with other advise) in stopping the spread.

Trump was impeached in February. Farmers were getting massive government bailouts because of Trump's war with China.

The centerpiece of this year was the presidential election.

Democracy was shaken to the core as an out-of-control Trump tried to steal the election by whatever means were available to him.

Trump appointed a minion to slow down the USPS as part of his effort to discredit mail-in voting. He hired a legion of lawyers to file frivolous lawsuits in every swing state he was losing in. All were rejected.

When Biden was declared the winner on November 7th, Trump locked himself in the White House bunker and refused to concede to reality.

As Trump was going through the first of five stages of grief - denial - GOP leaders put their blinders on and pretended he didn't lose. Some are still pretending. Some have chosen to recognize reality.

Amidst all the tribalism I've seen this year something stunned me yesterday.

Charles Koch (and democratic boogeyman) not only congratulated Biden on his victory, but he said he looked forward to working with him (!) to restore protection for "Dreamers," enacting policing reform that addresses systemic racism, and rolling back Trump's tariffs.

Quote for the Day: "No one is exempt from the surprises of life." -Mehmet Murat ildan